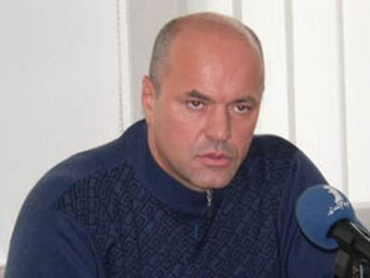 As well as Ua-reporter.com foresaw, yesterday's report of press-service of the Uzhgorod city executive committee allegedly the attack of unknown person with a gun vs the mayor of the Uzhgorod city was a cynical attempt to justify the hooligan and inhuman act of Serhiy Ratushnyak, giving a dusting the drunk passer-by near the Chemistry faculty of Uzhgorod National University.

The journalists of Ua-reporter.com conducted journalistic investigation, polling the unintentional witnesses of the "armed attack" of Ratushnyak and... terrified!

About 6 p.m. tipsy passer-by, passing near the chemistry faculty, where the workers of communal enterprises of city council shifted a sidewalk tile, got stuck and blew off the barrier of the project site. Instead of apologize; drunk man began to rude them. There was a string squabble on the rude tones and with a gesticulation between him and the workers. At this time the mayor of Uzhgorod Serhiy Ratushnyak was driving by and saw what was going on. He decided to stop and inquired about the incident that took place there. Walking up to the workers he heard that a man (who at that moment already "got tired" and sat down on a bench to talk on a mobile phone) blew off a barrier, trampled sand on a ground and threatened to the workers. Ratushnyak swapped a hand and four skinhead musclemen, from the criminal grouping well known in Uzhgorod, went out of the car of "guard" (it followed constantly after his off-road "Mercedes") and walked to him. Without a talk all together they began to beat unmercifully a sitting on a bench tipsy man, we underline, together with Ratushnyak, which accepted the most direct participation in beating. Three militiamen of patrol service, which were in 30 meters from the place of crime and looked, as hypnotized at all what was going on, and did not think to interfere, they were simply scared. It was good that one of them was smart to call for a duty detail from police department. Before the arrival of operative group into place of incident one of bandit-guard gave up some object on the bench where a passer-by sat on, which turned out late a pneumatic pistol used for “attempt on Ratushnyak’s life". The drunk "killer" was taken away to the police department.

At once the guy’s mother assures – a son had a drink quite a bit and sat down on a bench for the rest. He touched nobody. As suddenly the guard of mayor nag at him and began to beat. A woman revealed to the TV channel of STB (the program «Vikna»), that the police already freed a boy from the arrest. But investigation proceeds.

Halyna (the guy’s mother): "Three men beat my son, including Serhiy Ratushnyak. I am responsible for my words. I did not see a gun in my child’s hands. They beat him, and broke his hand. Hundreds of people stood and nobody did anything."

Today morning the judge of the Uzhgorod district court released from the arrest a defendant in «attempt on Ratushnyak’s life", which actually appeared a SUFFERING FROM LAWLESSNESS OF SERHIY RATUSHNYAK AND HIS BAND. THERE ARE HAEMATOMAS AND BRUISES ON THE BOY’S FACE.

THE PRESS-CONFERENCE OF UZHGOROD URBAN POLICE DEPARTMENT CHIEF VITALY SHIMONYAK WILL BEGIN AT 17.00. WE’LL SEE, AS FAR AS VALUES HONOUR OF FULL-DRESS UNIFORM AND FOLLOWS LAW THIS CHIEF.

Vitaliy Shimonyak (Uzhgorod Urban Police Department Chief of Ukraine in Zakarpattya REGION): "According to mayor, he with two guards walked up to youth, to take away a pistol. Two policemen of Government service of guard walked upon on it. They Saw a crush, and caused a duty detail by a mobile telephone. After that the participants of incident were taken away to the city management. The fellow resisted policemen during detention. All the described evidences are discordant." The mother of the 20-years Uzhgorod citizen, who witnessed the crush, already wrote a statement to the city management. She accuses the mayor and his accompaniment in body prejudice to her son.

A city chairman Serhiy Ratushnyak, special desire personally to comment a situation also does not discover. Uzhgorod city mayor: "I won’t tell you anything. You may write any filth you want.”