Briefly about the latest news from the Ukraine 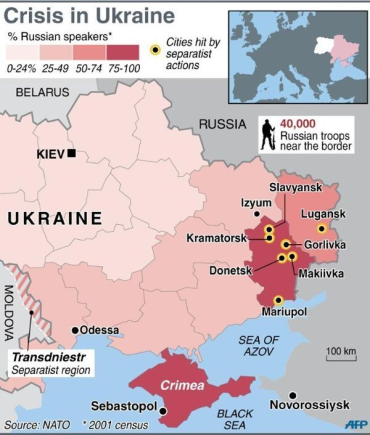 Worsening of the humanitarian situation in eastern Ukraine is quite serious, spokesperson for the OSCE SMM Michael Bociurkiw announced this at a briefing in Kyiv, Ukrinform reported.

A new mechanism is being considered for draft that will make professional experts in agribusiness exempted from draft in anti-terrorist operation in eastern Ukraine, Deputy Minister of Agriculture and Food Oleksandr Sen told reporters Friday at a press conference in Kyiv.

Council of Representatives of Crimean Tatar People moves to Kyiv

Russian-backed terrorist groups in Donbas may make provocations, including mining, especially at Easter, so civilians should be cautious, spokesman for the anti-terrorist operation in eastern Ukraine Andriy Lysenko said this at a briefing in Kyiv on Friday, Ukrinform reported.

A citizen of Ukraine, who was on board of the Dalniy Vostok Russian trawler, died, Foreign Ministry spokesman Yevhen Perebyinis has told reporters on Friday, Ukrinform reports.

A process of reorganization has begun in the Health Ministry of Ukraine. First deputy minister Olena Tereshchenko has already written application for voluntary resignation, health minister of Ukraine Alexander Kvitashvili announced at a briefing on Friday, Ukrinform reports.

On April 2, NJSC Naftogaz Ukrainy transferred $30 million to OAO Gazprom to pay for Russian gas for April, spokesperson for Naftogaz Olena Osmolovska has confirmed in a commentary to Ukrinform.

Opening credit lines to SMEs is one of the priorities of Oshchadbank JSC in 2015 - 2017, chairman of Oshchadbank Board of Directors Andriy Pyshny told reporters on Friday during his working visit to Luhansk region.

Three Ukrainian military wounded in Donbas in past 24 hours

During the last day no casualties among Ukrainian soldiers were reported.

The trilateral contact group on resolution of the situation in Donbas discusses the expansion of weaponry withdrawal from the line of confrontation, including tanks and weapons of caliber up to 100 mm in order to reduce tension in the region, spokeswoman for representative of the Ukrainian party to the contact group Leonid Kuchma Darka Olifer has said on Facebook.

One in five Ukrainians want to live without occupied territories

Almost 18% of Ukrainians support separation of the occupied territories of Donbas from Ukraine.

Representatives of the OSCE Special Monitoring Mission (SMM) to Ukraine continue to observe violations of the ceasefire in Donbas.

29 OSCE patrols work along the line of confrontation in Donbas, while 60 patrols in total monitor withdrawal of heavy weapons in Ukraine, MP from the Bloc of Petro Poroshenko faction Artur Herasimov said after the meeting of speaker of Ukraine's parliament Volodymyr Hroisman and Ukrainian MPs with chief monitor of the OSCE SMM Ertugrul Apakan.

The U.S. State Department has released a statement in which it strongly condemned the shutdown of the Crimean Tatar media, as well as the continuing persecution of ethnic minorities and those who disagree with the occupation authorities in the peninsula.

The state feels a tremendous shortage of personnel and lack of educated professionals that are needed for changing the country, President of Ukraine Petro Poroshenko said during his meeting with the teaching staff and student activists of the higher educational institutions of Ternopil region.

Military activity of Russian- terrorist units was observed at the direction of Artemivsk, head of the Information Resistance group Dmytro Tymchuk wrote on Facebook on Friday.

Ukrainian President Petro Poroshenko has signed a law, banning broadcasting of films that promote the law enforcement agencies, armed forces and other military formations of the Russian Federation, or ones the plot of which is directly or indirectly related to the activities of these agencies or groups, as well as the entire Russian film production, released from January 1, 2014.

The Interior Ministry of Ukraine has initiated the criminal proceedings against the subordinates of Ukrainian tycoon Dmytro Firtash over abuse of office and embezzlement of public funds, Interior minister Arsen Avakov said on Facebook.

No casualties reported in Donbas in past 24 hours

In the past day no Ukrainian servicemen have been killed and no have been injured in the area of the anti-terrorist operation in Donbas.

The German Chamber of Commerce is to be opened in Ukraine in the coming months. In addition, several visits and conferences on economic and investment cooperation between the two countries will be held soon.

The next Russian so-called "humanitarian convoy" [23rd] crossed Ukrainian border at the checkpoints that are not controlled by Ukrainian border guards on Tuesday morning, according to Radio Liberty.

The President of Ukraine has signed the law on amendments to certain legislative acts of Ukraine on the simplification of business practices (deregulation), adopted by the Ukrainian parliament on February 12.

Ukrainian Prime Minister Arseniy Yatseniuk has said that Ukraine fully complies with the Minsk agreements. He said this speaking at the Konrad Adenauer Foundation on Wednesday, Ukrinform reported.

Crimean Tatar news agency QHA (Qirim Haber Agentligi/Ajansi) has announced that its editorial board moves from Crimea to Kyiv.

Former Prime Minister of Slovakia Mikulas Dzurinda has agreed to become the advisor to President of Ukraine Petro Poroshenko, Yevropeiska Pravda has informed, referring to the Slovak daily Dennik N.

Militants send 20 trucks with industrial equipment from Donetsk to Russia

The militants have sent 20 semi-trailer trucks with industrial equipment of a Donetsk enterprise to Russia, deputy commander of the anti-terrorist operation in Donetsk and Luhansk regions Colonel Valentyn Fedychev announced this information on April 1, the press office of the Donetsk Regional State Administration reports.

A group of influential U.S. senators have called on FIFA President Josef Blatter to deny Russia the privilege of hosting the 2018 FIFA World Cup.

There have been four citizens of Ukraine on board of the Russian freezer trawler “Dalniy Vostok” which has sunk in the Sea of Okhotsk off the Kamchatka Peninsula.

The U.S. Army plans to deploy more soldiers to Eastern Europe later this year in a show of support for its NATO allies against Russian military involvement in Ukraine.

Ukraine has signed the new agreement on natural gas purchase from Russia in the second quarter of 2015.

President of Ukraine Petro Poroshenko met with the delegation of leading experts of the European Council on Foreign Relations (ECFR) and stressed the need for solidarity of the EU on Ukrainian issue.

Ukraine needs the support of the UN peacekeeping mission to stop the aggressor, President of Ukraine Petro Poroshenko stated at the meeting with the delegation of former heads of state - board members of Nizami Ganjavi International Centre, the press service of the Head of State reports.

Prime Minister of Ukraine Arseniy Yatseniuk and German Chancellor Angela Merkel are to discuss implementation of the Minsk agreements and economic projects in support of Ukraine, head of the Ukrainian government Arseniy Yatseniuk has told German journalists, starting his visit to Berlin.

EU pleased with security of gas supply through Ukraine

Militants disrupt the process of prisoner exchange, but the Ukrainian party will make every effort to release all servicemen, ATO spokesman Andriy Lysenko has said this at a briefing on Wednesday, Ukrinform reports.

The Prosecutor General's Office of Ukraine (PGO) has decided to refuse to extradite Mikheil Saakashvili to Georgia.

The UN Children's Fund (UNICEF) launches a mine-risk education campaign in eastern Ukraine aimed to provide the information about the risks posed by landmines and explosives, the official report of the UNICEF says.

Russian-terrorist groups continue to carry out armed provocations against Ukrainian military in eastern Ukraine. The main activity of the enemy was observed in the directions of Donetsk and Mariupol, the press center for the anti-terrorist operation in eastern Ukraine reported.

Jaresko: Ukraine to get another $1 bln soon

In the coming days Ukraine will sign a document with the United States on granting one billion dollars, finance minister Natalie Jaresko told in an interview with the Ukrainian Channel 5 on March 31, RBC reports.

Russia to stop gas transit to EU via Ukraine in 2019

Russian energy minister Alexander Novak and CEO of Gazprom Alexei Miller have confirmed the information that Russia will stop gas transit to Europe via Ukrainian territory in 2019, minister of Greece for industrial reform, environment and energy Panagiotis Lafazanis said.

The World Bank will allocate Ukraine $800 million for construction and repair of roads, Ukrainian Prime Minister Arseniy Yatseniuk said at a meeting of the government, Ukrinform reported.

Ukrainian Prime Minister Arseniy Yatseniuk has met with a delegation of the U.S. House of Representatives headed by Chairman of the House Committee on Armed Services William Thornberry, the government website has reported.

Warsaw and Helsinki support the territorial integrity of Ukraine and demand the implementation of the Minsk Agreements, President of Poland Bronislaw Komorowski and President of Finland Sauli Niinisto said this during a press conference in Warsaw on Tuesday, Ukrinform reported.