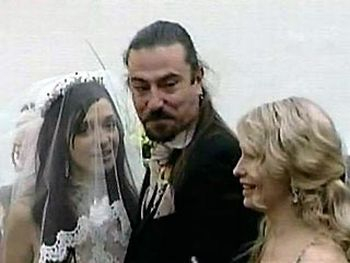 Yevhenia Tymoshenko, 25, married Briton Sean Carr, 36, at an Orthodox chapel in the Ukrainian capital Kiev. Mr Carr led his bride out to waiting press and well-wishers to the sound of bells and Scottish bagpipes.

Well-wishers - many of them elderly Ukrainian women - shouted "happiness" in Ukrainian and English.

Many of the well-wishers came to see Yulia Tymoshenko, who wore her usually braided hair loose over her shoulders.

"The sort of woman like Yulia Volodymyrovna comes around only once in 100 years," said Lyudmila Zaleskaya, 61, in reference to the former prime minister.

"Our government, our whole country should be proud of a woman like her. I'm here because of Yulia."

The couple met at an Egyptian tourist resort. Yevhenia Tymoshenko is a student at the London School of Economics, while Mr Carr is a former shoe salesman who sings with the heavy metal band Death Valley Screamers.

Mr Carr travelled to Ukraine at the peak of December's Orange Revolution, where he met his formidable future mother-in-law - the "goddess of the revolution" - and saw her enthral crowds with speeches in Kiev's Independence Square.

Mr Carr has moved his Harley-Davidson bike and giant rottweiler to his new home outside Kiev, which he shares both with his new wife and mother-in-law - who he apparently now calls 'mama'. While many Ukrainians seem bewildered by Miss Tymoshenko's unusual choice, she stresses their feelings are mutual and just how much she loves his music.

Yulia Tymoshenko has said: "He is a nice person and he adores my daughter, that's the most important thing." The Ukraine wedding is expected to be followed by a trip to Mr Carr's native Yorkshire.

The former prime minister, meanwhile, has vowed to win back her seat in elections next March.