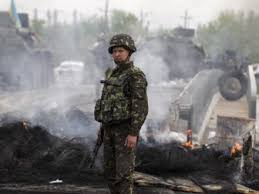 Ukrzaliznytsia plans to suspend passenger transportation in the area of the anti-terrorist operation in Luhansk and Donetsk regions.

Head of the Legal Department at Ukrzaliznytsia Oleh Tytov said this at a press conference on Tuesday, a Ukrinform correspondent reported.

"We will stop the movement of passenger trains in the area of the anti-terrorist operation. That is, we will transport people to the so-called border. When exactly this happens depends on the [Infrastructure] Ministry. A presidential decree [No. 875/2014 on the decision of the National Security and Defense Council of Ukraine of November 4, 2014 on urgent measures to stabilize the socio-economic situation in Donetsk and Luhansk regions] stipulates that the concerned ministry exercises control and makes the final decision," Tytov said.

One Ukrainian serviceman has been killed and five more have been wounded in the Donbas conflict zone over the past 24 hours.

"Over the past 24 hours, we have lost one of our warriors, and five more have been injured," Lysenko said.