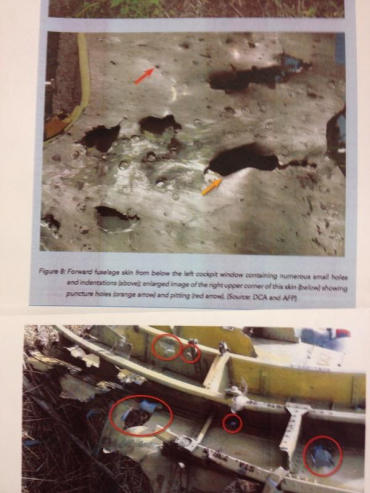 The wreckage of Malaysia Airlines flight MH17 - downed over Ukraine in July - was "consistent with the damage that would be expected from a large number of high-energy objects that penetrated the aircraft from outside", crash investigators said today.

The fact that there were many pieces of aircraft structure distributed over a large area indicated that the Boeing 777, en route from Amsterdam to Kuala Lumpur, broke up in the air, a preliminary report by the Dutch Safety Board (DSB) said.

A total of 298 people, including 10 Britons, died in the July 17 incident, which came only weeks after another Malaysia Airlines Boeing 777 disappeared over the Indian Ocean.

The DSB said the black boxes recovered from the war-torn crash site in Ukraine showed no evidence of manipulation.

The black box cockpit voice recorder (CVR) which provided a record of pilots' conversations "gave no indication of any malfunction or emergency" before the crash.

At the time of the crash, the aircraft was flying at a height of 33,000ft in the eastern part of Ukraine. It was flying on a constant heading, speed and altitude when the FDR ended, the DSB report said.

Three other airliners could have met the fate of Malaysia Airlines doomed plane as air traffic controllers tried to clear traffic minutes before it was shot down, writes Gwyn Topham