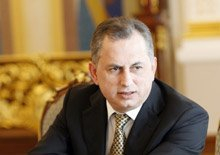 Ukrainian Deputy Prime Minister and Infrastructure Minister Borys Kolesnikov has said he believes that foreign fans who visited Ukraine during EURO 2012 remained satisfied and became a part of a big festival. He announced this live on the Echo of Moscow radio station.

"I heard the opinions of fans from almost all countries that participated in the tournament in our country. At the same time, I heard no negative comments. But most importantly, the world's press are amazed at the EURO festival in Ukraine," Kolesnikov said. When asked how much funds were spent on EURO 2012 in Ukraine, Kolesnikov said: "The question is what is considered 'EURO.' If we take into account operating expenditures, i.e. expenditures on advertising, information, language learning, it cost 50 million dollars. These were the lowest operating expenditures over the whole history of European football championships." As for the facilities that were prepared directly for EURO 2012, these are, first and foremost, three stadiums, the vice-premier said. "The fourth stadium is a private one, which was built using the funds of FC Shakhtar. The three stadiums (in Kyiv, Lviv, plus our participation in the Metalist public-private project in Kharkiv) cost the country 800-850 million dollars," Kolesnikov said. He also said that the remaining USD 4 billion out of a total of USD 5 billion had been spent on roads and three international airports with four completely new runways - in Lviv, Kharkiv, Donetsk and Zhuliany (Kyiv). "USD 3 billion was spent on 2,000 kilometers of roads that were reconstructed, significantly modernized and built anew," he said. According to Kolesnikov, thanks to EURO 2012, Ukraine has moved forward in the issue of high-speed rail services. Apart from the host cities that were linked by Hyundai high-speed trains, such trains will also start running to Odesa this year, he said.