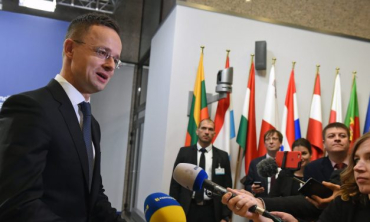 “Hungary has always wanted a relationship based on mutual respect with Romania in the interests of the Hungarian community living there”, Minister of Foreign Affairs and Trade Péter Szijjártó said on Hungarian M1 television’s Monday morning current affairs program.

Mr. Szijjártó was reacting to the fact that on Wednesday evening the Romanian Prime Minister told news television station Realitatea with relation to Hungarian autonomy aspirations: “My answer is the same as it was when, to mark some day or other, they tried to host the flag. At the time I made it clear that if that flag will be blowing in the wind, the local people responsible will also be hanging up there next to it”.

According to the Minister, in 21st century Europe it is totally unacceptable for a complete national community and its leaders to be threatened with hanging and death.

“It is the duty of the Hungarian Government to make it clear that a statement of this kind is totally indefeasible and to strike the Prime Minister of Romania from the list of civilised European politicians”, Mr. Szijjártó said.

With relation to planned legislation that would further restrict the rights of minorities in Ukraine, the Foreign Minister said the situation is extremely serious in view of the fact that nobody took the risk posed by the Education Act seriously.

“Instead of mitigating the conflicts, Ukraine has made further proposals for the restriction of language use and citizenship. For instance, it will be compulsory to display a Ukrainian transcript of the dialogue during theatre productions and Hungarian newspapers will also have to be published in two languages”, Mr. Szijjártó said.

“The Hungarian Government will be making a stand against the latest measures with the same tenacity as it did against the Education Act”, the Minister declared.

Mr. Szijjártó was also asked with relation to Dutch Prime Minister Mark Rutte’s statement on illegal immigration. Speaking on Dutch television, the politician said: “You can’t say I don’t want this, and instead buy yourself out by contributing financially towards their resettlement in another country”.

The Foreign Minister said Hungary’s stance on migration was absolutely clear: “Hungary does not want to become an immigrant county, it views migration as a security issue, it will not bow to pressure with regard to the introduction of a mandatory resettlement quota, it will not allow a single illegal immigrant into the country, and it continues to maintain that Europe must be protected outside Europe”.

Speaking on Kossuth Radio’s “180 Minutes” programme, Mr. Szijjártó said with relation to the Romanian Prime Minister’s statement that debates on autonomy are ongoing in Europe and there are various forms of autonomy. “In the 21st century one cannot dispute the legitimacy of whether autonomy can or cannot be a subject of debate. Debates must be argued, but doing so while threatening people with death is unacceptable”, the Hungarian Foreign Minister stressed.