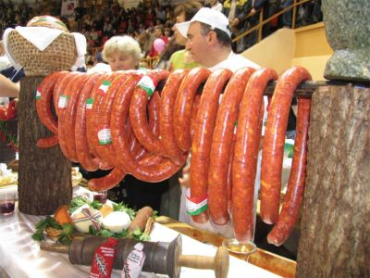 An international pig slaughtering competition will be held on Saturday in the village of Napkor in north-east Hungary, where prizes will go the best black pudding, sausage, mulled wine and the most skilful slaughterer, the event's organiser said on Monday.

Some 20 teams of butchers have registered so far but the organisers expect around 30-35 teams to compete at the event which starts at dawn, said Miklos Tamba.

Competitors will arrive from southern Slovakia, Vojvodina, Transylvania, Transcarpathia and all parts of Hungary, he added.

At the end of the day, a jury of gastronomic experts will assess the various products made from the slaughtered pigs, drinks that are traditionally consumed during the event and teams' performances.

The annual event is being held for the ninth time this year. Last year's competition attracted some 40,000 visitors and similar number are expected this year. In addition to gastronomy, the festival will also feature concerts and traditional dance performances.