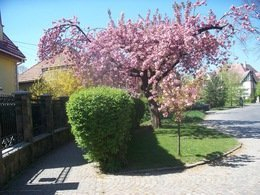 This Saturday, the Day of Community Cleanup took place in our country. In Uzhgorod, people in almost all neighbourhoods were also cleaning their streets, parks and yards. However, there are people, who maintain order and cleanliness in their neighbourhoods throughout the year, and not just on one specific day of the week.

A striking example is Laborets Square in Uzhgorod.

Townspeople have repeatedly shared their impressions of the square in the group "Uzhgorod" on facebook. In particular, Uzhgorod resident Mrs. Natalia.

"If any of Uzhgorod residents has not been on Laborets Square lately, it is worth a visit. One of the local residents, Mr. Volodymyr, supported by two neighbors, decided to clean up this little part of city.

First, they removed 15 truckloads of branches and debris. Broken sewage system had to be repaired. They restored some sidewalks. Installed street lights. Planted 15 sakura trees.

Gradually, they are restoring and trimming the lawns, form shrubs and trees using their own equipment. Recently, they purchased a cultivator, because lawns are quite big. Residents of Zakarpatska street are also getting gradually involved. And what about other citizens?

Most believe that if they pay taxes, then the government must take care of the square. But none of them tells how to achieve this and does not make any moves. Others believe that the activists just have nothing better to do. There are others, who spin fingers to their temples. Such is the fate of those who undertook such altruistic mission. But they clearly know their goal," - the woman writes.