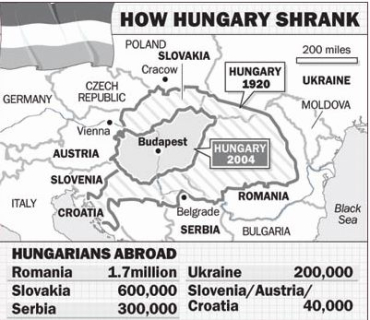 Hungarians around the globe marked an ominous and despairing memorial this June 4. Ninety-one years ago, in the turmoil and chaos of post-war Europe, the Treaty of Trianon (signed June 4, 1920) forever altered the regional ethnic structure of Central and Eastern Europe.

A treaty designed for peace destabilized a continent already mired in violent historical legacies. The Treaty of Trianon truncated over two-thirds of the former Kingdom of Hungary into new nation-states placing 3.5 million ethnic Hungarians under foreign and hostile rule. Trianon created one of the largest ethnic displacements Europe has ever witnessed and ensured an enduring legacy of endemic deficiency to protect and preserve minorities.

The creation of Czechoslovakia; the annexation of Transylvania to Romania; the awarding of Burgenland to Austria; and the integration of Croatia, Bácska and the Banat into Yugoslavia from the remnants of the former Hungarian Kingdom, ensured a constant state of mistrust and conflict guided by growing greed and revenge in the anticipated decline of the Austro-Hungarian Empire. Census data compiled in 1910 reveals a strikingly multi-ethnic kingdom balanced by the structures of privileged order and restrained nationalism. However, that polyglot empire, while extremely centralized, divulged considerable autonomy to it minorities. The rise of ethnic identities and nationalism in the late nineteenth and early twentieth century – coupled with oppressive and old feudal social structures within the Habsburg lands – justified, within the principles of self-determination, a modest redrawing of borders along ethnic lines. Those principles however were abandoned as alliances, fabrications, secret treaties, hypocrisy and self-interest framed the peace negotiations. Trianon largely became a fait accompli.

World War I and the ensuing new European order would change the status quo dynamics and serve as the forbearer of instability and ethnic division in Central and Eastern Europe. The Paris Peace Conference – and its dictated peace settlements – is now widely accepted to be the root cause of World War II and the continued ethnic agitation of present day. The disintegration of the former Yugoslavia and the Balkan wars; the splitting of the Czech and Slovak Republics; and thwarted attempts at autonomy and self-rule in Transylvania, Transcarpathia, and Vojvodina all have roots in the legacy of Trianon and the failure of peacemakers to uphold the principles of self-determination.

Memorials such as these have a tendency to reopen historical wounds. With ninety-one years now past since Trianon, Hungarian minorities have struggled to maintain their numerical consistency with just over 2 million in present-day Slovakia, Ukraine, Romania, Serbia, Croatia, Slovenia, and Austria. Almost a century of survival against state sponsored discrimination, ethnic cleansing, and forced assimilation has degraded a once proud unity and purpose for Hungarian minorities. However, discrimination against Hungarian minorities continues unabated and remains unchallenged by vague and often ambiguous treaties on minority rights and blatant violations by states which comprise sizable minority enclaves. Trianon may have given birth to new nations and new identities; but failed to bring the lasting peace envisioned by its creators. Then British Prime Minister, David Lloyd George, noted in 1919:

“No settlement which contravenes the principles of eternal justice will be a permanent one…We must not allow any sense of revenge, any spirit of greed, and grasping desire to over-ride the fundamental principle of righteousness”

Like Germany, Turkey, Bulgaria and Austria, Hungary merits a certain level of responsibility for the war but not as much as was eventually bestowed on it. Hungarian elites and landed gentry were supportive at the outbreak of war and the possibility of extending a Hungarian sphere of influence in the Balkans, but only in so far as their duty to the Emperor and the Kingdom itself. However, proportionally, no other European state was dismembered with the ferocity and conviction as Hungary. No other nation suffered greater punishment at the hands of the victors and successor states. Few minorities, in a European context, would be left to states determined to eradicate – dare I say exterminate – their minorities as the Hungarians were.

Under the provisions of the Treaty of Versailles Germany lost a mere 13 percent of its former territories and colonies. The Treaty of Neuilly severed Bulgaria’s access to the Aegean Sea but affected minimal territorial loses of approximately 8 percent. The Treaty of Sèvres, and the subsequent Treaty of Lausanne, witnessed the slow disintegration of the Ottoman Empire and its sphere of influence but no ancestral lands were removed. The Treaty of Saint Germaine-en-Laye severed non-Germanic lands from the Habsburgs but awarded Burgenland, a part of Hungary, to Austria nonetheless. Hungary was to cede upwards of 72 percent of its ancestral lands and, as a result, abide by harsh and catastrophic economic constraints. Trianon, like much of the Paris negotiations, was, in the words of the eminent British economist John Maynard Keynes: a Carthaginian peace. It may indeed be a stretch to even append the term peace to the Paris conference at all.

The twenty-first century has failed to afford any relief to the legacy of Trianon. Admission to international organizations and conventions on human rights by all of the regions states has fallen short of protecting ethnic minorities or addressing past historical injustices. Although the issue of Hungarian minorities has remained non-violent in its manifestations, one need not look far to witness the enduring division caused by Trianon in the former Yugoslavia for example. The European Union’s vague and often ambiguous minority protection framework has left gaping holes in continental and international legislation governing minority protection and human rights. This has resulted in blatant violations of minority rights in states with considerable minority populations and has often jeopardized regional stability and cooperation.

Escalations in political and ethnic tensions between Hungary and its neighbouring states has been buoyed by the rise of nationalistic governments in Slovakia, instability in the Balkans, and the passing of new citizenship legislations in Hungary. With only 21 years since the states of Central and Eastern Europe threw off the chains of Soviet oppression, the process of state and identity building continues. Ethnic cohesion is seen as a threat to statehood and therefore serves as a smokescreen. That smokescreen has left not only enduring hatreds but a perplexing ethnic problem: millions of Hungarians forced to live in states with abhorrent human rights records on ancestral lands. The rationale for which may never be fully understood.

Since joining NATO and the EU divisive ethnic issues have subsided as regional states focus their attention on internal reform and meeting political and economic pressures from Brussels. However, the legacy of an inequitable peace still haunts the future; and a resurgence of nationalism – albeit a restrained variant – has marked a disturbing trend across the region. In the context of European history the legacy of Trianon, still fresh, shapes the political landscape. Although territorial revisions are distant as a solution ethnic models such as autonomy, devolution, or self-determination are viable. While the very credibility of continental and international organizations has been questioned, the “Hungarian question” only affords time to the successor states to further degrade and destroy Hungarian minority enclaves.

If, in the words of David Lloyd George, the Paris peace violated and contravened the very principles that Europe stands for then a deserved redressing of Trianon is valid. Peace was not achieved and ethnic cohesion among the ethnicities of the region has never and will never be in full harmony. Trianon may not be an isolated event but its legacy and effect have ensured that the potential for conflict will always be in place.

Propaganda and populism aside, we must recognize that the very norms for which so many lives have been lost, and so many impasses overcome, fail to protect those who live in minority status. If we continue to pay lip service to those values we risk undermining the ‘European project’ and, by effect, appeasing those nations such as Romania, Slovakia, Ukraine, and Serbia who believe that there very future depends on suppressing their multi-ethnic character. While others will point to Hungary’s intention of keeping the issue of Trianon alive, it is the neighbouring states who live the guilt of a host of heinous crimes against basic human rights. If any lesson may be learned by states with Hungarian minorities it is that lands may be appropriated but the spirit of a people and their cultural identity can survive.

As the inheritors of this ominous legacy we must shoulder a heavy burden to ensure justice is done not only for Hungarian minorities but all minorities. There is a belief that the safety of the European Union or international legislation is enough to protect minority communities. History has proven otherwise. Trianon has and will continue to symbolize not only a gross violation of human rights but a case of our own collective failures. As a new generation re-learns the “Hungarian question” we can only hope that new solutions may be found within the confines of international diplomacy and law. The legacy of Trianon haunts the region and, until corrected in some form, the historical narrative of Central and Eastern Europe will remain unfinished.