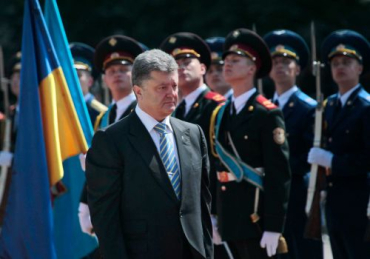 Ukraine's new president on Saturday called for dialogue with the country's east, gripped by a violent separatist insurgency, and for armed groups to lay down their weapons but said he won't talk with rebels he called "gangsters and killers."

Petro Poroshenko spoke in parliament after taking the oath of office and assumed leadership of a country mired in an uprising, severe economic troubles and tensions with its giant neighbor Russia.

The 48-year-old Poroshenko, often called "The Chocolate King" because of the fortune he made as a confectionery tycoon, was elected May 25 and replaces an interim leader who had been in office since Russia-friendly president Viktor Yanukovych fled the country in February after months of street protests against him.

The fall of Yanukovych aggravated long-brewing tensions in eastern and southern Ukraine, whose majority native Russian speakers denounced the new government as a nationalist putsch that aimed to suppress them.

Within a month, the Black Sea peninsula of Crimea was annexed by Russia after a secession referendum and an armed insurgency arose in the eastern provinces of Donetsk and Luhansk. Ukrainian forces are fighting the insurgents in those regions and officials say more than 200 people have been killed.

In his inaugural address, Poroshenko promised amnesty "for those who do not have blood on their hands" and called for dialogue with "peaceful citizens" in the east.

"I am calling on everyone who has taken arms in their hands — please lay down your arms," he said, according to a translator. He also called for early regional elections in the east and promised to push for new powers to be allotted to regional governments, but he rejected calls for federalization of Ukraine, which Moscow has called for.

Poroshenko also insisted that Ukrainian would remain the sole state language of the country, but promised "new opportunities for the Russian language," without giving specifics.

Despite the outreach to Putin, Poroshenko said he will not accept Russia's annexation of Crimea.

"Crimea was, is and will be Ukrainian. There will be no trade-off," Poroshenko said.

Russia annexed the territory in March after its troops took control of the Black Sea peninsula and Crimea held a secession referendum that Kiev and Western countries regard as illegitimate.

Putin has denied allegations by Kiev and the West that Russia has fomented the rebellion in the east, and he insisted Friday that Poroshenko needs to speak directly to representatives from the east.

Ukraine's President Petro Poroshenko says Crimea "is, was and will be Ukrainian."

The billionaire businessman took the oath of office as the country's fifth president since the breakup of the Soviet Union Saturday in the capital, Kyiv, in front of parliament, world leaders and dignitaries, including U.S. Vice President Joe Biden.

Poroshenko said during his inaugural address he will not accept Russia's annexation of Crimea. Moscow sent troops to the Black Sea peninsula earlier this year and took control of it in March.

The new Ukrainian leader also pledged dialogue with countrymen in the east of the country where pro-Russian separatists have clashed with Ukrainian forces.