Salo in Ukraine is more than just a national dish 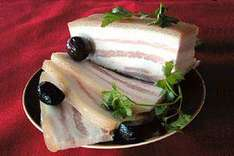 The Ukrainians joke that the entire philosophy and state system of the country are based on this product. If the candidate for presidency announces publicly that he is a vegetarian, then he risks not only to lose the election, but also to end his political career. In Ukraine he simply wont’ be understood.

Salo for most Western Europeans, crazy about fat diets, is equivalent to a dose of cyanide. Because in fact this product consists of pure fat. However, any Ukrainian will tell you that salo has many useful properties. It is even given to the babies, as subsidiary means for the dentition.

Salo is made from lard, or rather the fat layer. Traditional Ukrainian salo is medium salted, strong, with the addition of caraway and garlic. However, there are many options for salting and adding spices: with paprika, sesame, Bulgarian pepper, hot pepper.

Salo is spread not only in Ukraine but also in Belarus and Russia. However, the sympathy, which Ukrainians feel for salo, and the way of cooking it makes Ukrainian salo not just a meal. Salo, along with the flag and the coat of arms, is the symbol of Ukraine.

When chocolate bars «Snickers» and «Mars» had just emerged in Ukraine, Ukrainians for a lark started to produce an analog of the popular sweets. The sweet was called «Salo with chocolate». In Ukrainian folklore salo is one of the main characters of anecdotes and jokes.

The best salo, which only can be found is cooked in the Western Ukraine. So, if you decide to travel to the Ukrainian Carpathians, Lvov or further, to Transcarpathia (Uzhgorod), you would have a great opportunity to taste the famous Ukrainian food brand in its best version.

Not so long ago salo was promoted to the Ukrainian Book of Records. Or rather it was not the very salo, but a sandwich with it. It was cooked in Dnepropetrovsk, weighed 90 kg and its length was 12 meters.