The tourism industry in Svalyava and vicinity is thriving 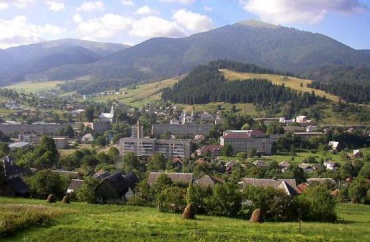 The best way to get to Svalyava from Kyiv is through the town of Starokostyantyniv. Pass through and turn off the Zhytomyr Highway and drive along and ordinary two-lane road, the shortest and picturesque route to our destination point passing through the county center Chudniv.

There are only a few places in the world where travellers can enjoy the majestic beauty of four wooden churches and one stone Catholic church dating back to the 18th century and having the same landscape. You can also visit the unique four-tiered wooden carved iconostasis inside the 1769 Church of St. Peter and Paul in Chudniv and preserved in the same state to this very day.

The next stop is Starokostyantyniv, known for its ruined castle on a cape at the confluence of the Sluch and Ikopot rivers. Prince Kostyantyn Ostrozhkiy of famous dynasty of Orthodox magnates of the Rzeczpospolita (Poland) built it in 16th century. And though a catholic church was annexed to the castle, you can still see a typical Ukrainian outpost on the border with Dyke Pole (Wild Field). The castle was a part of the chain of fortifications to fend off Tatars.

A nice walk along the town’s river embankment will bring a smile to your face when you come across futuristic sculptures of a shy mermaid and a happy-go-lucky ant made of scrap metal peering out from the reeds. How this trash did not end up in a scrap yard remains a mystery. But the concept and the execution are brilliant!

Further down the road ignore the sign leading you to Kamyanets-Podilskiy. This place needs several days to appreciate its beauty. We are now travelling westbound. Just past the village of Yarmolyntsi, turn off to Husyatyn. The town lies between the steep banks of the Zbruch, once a border between the Russian Empire and Rzecz Pospolita. The river divided the “city of two banks” up until 1939. The left bank was a Soviet village, while the right bank was a small West Ukrainiand town. There is a very old church in the downtown, once a part of a Benedictine convent.

Still further you will see a Gothic-Mauritanian edifice that was once a synagogue. A bridge going across the Zbruch River leads to Western Ukraine, where every town has its own charm of old buildings and memorials. One of them – the 17th century Church of the Exaltation of the Cross – can be seen passing through the town of Kopychyntsi.

We pull into the nice town of Chortkiv with its well-preserved Town Hall, shops and picturesque ruins of the castle built in 1610 by Jerzy Czartkowski, the first owner of these lands. In its time the castle was a stronghold with a developed system of underground dungeons, which is evident by the gaping holes visible in certain parts of the fortress.

The wooden Church of the Dormition in the center of town without a single nail dates back to 1635 is in immaculate condition. The Town Hall lends a medieval atmosphere to the central Market Square. Quite a bunch of Soviet-time movies were filmed here on locatiuons.

Our next stop is Buchach, a quaint little town that deserves a leisurely stroll. Once upon a time three was a 13th century castle on the bank of the Strypa River. Today its ruins seem to be in better condition than the castle in Chortkiv and are quite the sight to see. In the 17th century the castle survived invasions of Cossacks, Tatars and Turks and served as a shelter for the local residents. The army of Ottoman Sultan Mehmed IV laid siege to Buchach in the late 17th century. The count’s wife Tereza Potocki was put in charge of defending of the castle in her husband’s absence. As legend has it, the Tatars retreated when they realized that they were up against a brave woman. One Countess Potocki did not surrender her castle to the enemy.

The old Town Hall in Buchach is the town’s hallmark. This masterpiece was the joint work of architect Bernard Meretin and sculptor Jan Jerzy Pinzel. This was a symmetrical tower, the curved wooden statues of good and evil that manifest the world outlook of the town’s residents, who have always strived for order and independence.

The residents of Buchach are honest and kind-hearted people. Ask them to show you the highest point in the town to take some panoramic pictures and they will show you a path that runs between the blossoming yards of small private homes. We stop for a few minutes outside of town to take in the beauty of a 400-year-old linden tree the locals call “Golden”. The Treaty of Buchach was signed here on October 18, 1672 between Poland and the Turks and ceded Podolia to the Ottoman Empire.

When you arrive in Monastyrysk the tobacco factory dating back to the 18th century is a must see. The majority of the town’s residents are Lemky, or, as they call themselves, Rusyny, (sub-Carpatho Ruthenians), one of the four ethnic groups inhabiting the eastern part of the Carpathians. Here you can visit the museum of Lemko culture and way of life built in 1996 on the premises of a former county electric network administration thanks to the efforts of Anatoliy Duda, a local Greek-Catholic priest.

A huge bridge running across the Dniester River links two oblasts – Ternopil and Ivano-Frankivsk. The first densely populated town here is Tysmennytsya, which is known as the fur capital of Ukraine and boasts a rich fur shop and fur coats famous all over the world. Meanwhile, navigating Ivano-Frankivsk’s narrow streets is quite a challenge, but there is no alternative. As a rule, tourists do not stay long in this city, earlier known as Stanyslaviv, but this is in vain.

The city was founded by the Polish nobleman Andrzej Potocki, who is a descendant of the ancient Galician line of magnates that owned vast lands here. He named the city Stanislawow in honor of his father. He entrusted the city to the French architect Francisco Corasini of Avignon, who designed Ivano-Frankivsk as an “ideal city” in the shape of a star. The city’s center was the Potocki Stanislawow Castle from which streets and alleys were run to other parts of the city like rays of light.

Over the years Ivano-Frankivsk became a city of diversity of styles from all eras and peoples. Meandering through its narrow streets one will always come across familiar details seen in East-European and western countries.

Like many Western Ukrainian towns cities, life in Ivano-Frankivsk thrives around its City Hall. The building’s towering spire is visible from all points of the city, helping any lost tourists find their bearings.

Downtown, the Greek-Catholic Cathedral is a must see. A walk along Shevchenko St. and a visit to the Arts Museum on Sheptytskiy Square are also highly recommended. The gem of the museum’s collection is an icon of Holy Margaret painted in the second half of the 15th century.

Onward ho! In the olden days thick, impassable woods grew on the territory of the present-day town of Dolyna. The valley of the Syvka River was surrounded by hills. In early 1000s, Basilian monks founded a monastery on the Mt. Voznesinnya (Ascension). With time the town of Dolyna was built around this hill. A monument to Mykhailo Hrushevskiy was unveiled in the town’s central square. Residents of Dolyna are proud of this monument as it is the first one in the town dedicated to the first leader of Ukraine’s independence movement.

The building of the Museum of the Boyko Lands was financed by U.S. citizens Antonina and Omelyan Antonovych, who hail from Dolyna. For years, activists collected historical valuables and household tools of labor of residents of the mountain villages. The exhibits of the nature, history and sacred art of the Boykos are exhibited in five halls of the museum.

On the outskirts of town there is a gas station and a quaint cafe before heading up into the Carpathian Mountains. The Torun or Vyshkiv Overpass is one of the most difficult ones in the Carpathians for passage by vehicle. The narrow road winds up to the mountains through a thick forest of fir trees. At the very top you will have a magnificent view of the landscape below. The drive is reminiscent of a roller-coaster ride with rapid streams of an alpine river that in some places winds along the road and in others rushes in a deep ravine.

From Volovets we enjoy a nice, relaxing drive along a highway running along the ridge of Mt. Shyroka. Just a bit later and we reach the final destination of our journey – Svalyava, a resort town famous for its mineral waters.

In 1463, the curative properties of mineral waters in Svalyava were mentioned in the annals of a Hungarian king. The mineral waters of Svalyava have been exported to Vienna and Paris as expensive dinner beverages since 1800. In 1842, it was named one of the best mineral waters in Budapest and in 1855 it was awarded with a golden diploma at an exhibition in Paris. The tourism industry in Svalyava and vicinity is thriving. So, one is simply left to choose an affordable hotel or manor and enjoy the beauty of nature in Zakarpattya (Transcarpathia)