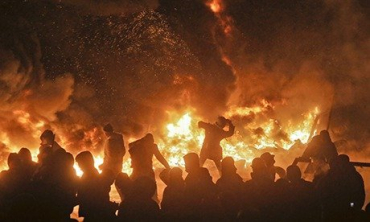 President predicts economic growth in Ukraine in 2016
31 марта 2015 г., 15:33:00
Ukrainian President Petro Poroshenko has said that economic growth in the country will be restored in 2016.This was aired by him while speaking at Chernihiv Regional State Administration. The President also said that subsidy payments to low-income families had to be ensured by then.

Investigation into Maidan events in 2014 inefficient
31 марта 2015 г., 15:22:00
Lack of coordination among the law enforcement agencies of Ukraine has led to an insufficient investigation into the Maidan events, Head of the international advisory group of the Council of Europe on overseeing the investigation into violence during the protests in Kyiv, which lasted through November 2013 February 2014.This opinion was expressed by Nicolas Bratza, member of CoE expert group.

Stolen money to be returned to state budget
31 марта 2015 г., 15:02:00
The arrested money of former Ukrainian officials are under state controlled and reserved for a return to the state budget. As reported on March 31 at a press conference by SBU head Valentyn Nalyvaychenko, this money is directed to social programs.

U.S. Congress supports reforms in Ukraine
31 марта 2015 г., 14:35:00
Ukrainian Prime Minister Arseniy Yatseniuk has met with a U.S. House of Representatives delegation headed by Chairman of the House Committee on Armed Services William Thornberry, and he thanked the U.S. Congress for supporting Ukraine in boosting the country's defense potential.

Tensions persist in ATO zone
31 марта 2015 г., 14:24:00
This is what ATO Spokesman Andriy Lysenko said at a press briefing on March 31 in Kyiv. "The situation in the east is tense but steady. The enemy has used cannons or rocket artillery for several days. But provocations by the use of small arms and mortars go on. The worst violations of the ceasefire by the militants were reported from the village of Hranitne, at Donetsk airport, and the Bakhmut highway," he said.

Russia not to veto NATO membership for Ukraine
31 марта 2015 г., 12:41:00
Russia has no right for a veto on Ukraine's membership in NATO, NATO Secretary General Jens Stoltenberg said.According to him, this issue should be decided by 28 NATO allied countries and the country that claims for membership.

OSCE mission observers report of violations
31 марта 2015 г., 12:01:00
Observers of the joint international OSCE mission confirmed that the shelling from multiple launch rocket systems "Grad" of the checkpoints near Novotoshkivske in the Luhansk region, was done from the area controlled by the so-called "LPR".

Ukrainian soldiers to be rewarded
31 марта 2015 г., 11:50:00
More than UAH one million of UAH 15 million that is provided for this purpose was given to Ukrainian military as reward for destroyed or captured enemy equipment, as well as for successful military operations. .

Agriculture becomes Ukraine's export revenue locomotive
31 марта 2015 г., 10:25:00
When the industrial potential of Donetsk and Luhansk regions was destroyed in connection with aggression against Ukraine, and engineering commodities and steel exports have fallen, agriculture has become the locomotive of export revenue. Thisd is what Ukrainian President Petro Poroshenko said at the fourth meeting of the National Reform Council held on March 30.

Yatseniuk: Putin aims to split US, EU and launch new offensive
30 марта 2015 г., 17:21:00
Today, the main objective of Russian President Vladimir Putin is to undermine the common approach of the European Union and the United States against Russia due to its aggression in Ukraine, Ukrainian Prime Minister Arseniy Yatseniuk said in an interview with Associated Press, Ukrinform reported.

President endorses law in support of volunteers
30 марта 2015 г., 16:12:00
Ukrainian President Petro Poroshenko has signed a law that will facilitate the development of the volunteer movement in Ukraine and improve the quality of volunteer help, the presidential press service on Monday reported.

One Ukrainian soldier killed in Donbas conflict zone in past 24 hours
30 марта 2015 г., 15:33:00
Over the last day one Ukrainian military has been killed, another three have been injured in the area of the anti-terrorist operation in Donbas, spokesman for the anti-terrorist operation in eastern Ukraine Andriy Lysenko said at a briefing in Kyiv on Monday, Ukrinform reported.

US Congressmen to discuss supply of lethal weapons during their Ukraine visit
30 марта 2015 г., 12:54:00
On Monday, March 30, the delegation of US congressmen arrives in Kyiv, including Chairman of the House Committee on Armed Services William Thornberry (R-TX), and the House Majority Leader of the U.S. House of Representatives Kevin McCarthy (R-CA), Radio Liberty reported.

Ukraine's chief prosecutor: no untouchables for me
30 марта 2015 г., 10:18:00
Everyone whose actions fall within the Criminal Code of Ukraine will be brought to justiceб Prosecutor General Viktor Shokin told Inter TV Channel.