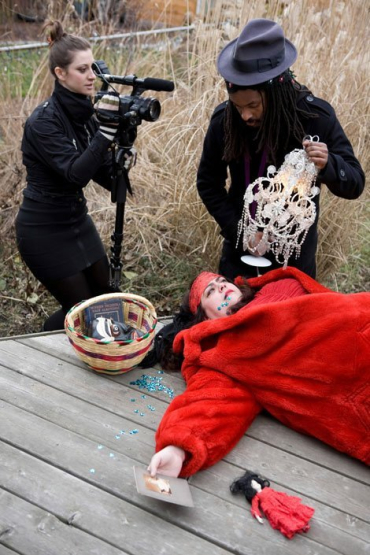 “You need to know every layer of the language of filmmaking so that you can abandon it,” says Toronto-based filmmaker Anita Doron. She has been challenging the very definition of film ever since she emerged from Ryerson’s film program back in 2001.

Born in Transcarpathia of the former Ukraine, Doron’s first foray into filmmaking was an environmental protest short that angered Soviet authorities. She was 12. These days, Doron calls Canada home, but she continues to search out politically and culturally charged themes, exploring them around the world with a cinematic style all her own.

“I loved the intensity of do or die filmmaking,” Doron says of the unorthodox methods she used on her most recent film, Europa, East. Filmed over a two-week span during a visit to Hungary, Europa, East’s central characters are played by actors, but the settings and background action are real. The trip coincided with the 50th anniversary of the 1956 Hungarian Revolution, an event Doron says has been perverted to perpetrate racism against Hungary’s Romani population.

“I couldn’t stay away from the protests,” says Doron of the demonstrations that took place across Hungary on that day. “I had to make that reality visible in my story.” Doron’s fictional central character weaves her way through angry crowds, and later attends the real funeral of a Romani father and son who, Doron says, were killed because they were Romani.

Doron used similar guerrilla methods while shooting Louise Del Mar, a Mexican comedy with a script that Doron penned every morning right before shooting. “I would get up, go into the outdoor kitchen with my laptop and start writing the script of the day,” explains Doron, who employed a stable of actors and extras from the Mexican beach town of Zipolite. “We would go into town to get all the props for the day. As the sun was setting I would start filming, and when we were finished we would party all night. This was my life for 30 days.”

Doron was also one of three directors to work on Late Fragment, North America’s first interactive feature film. In it, the viewer controls the perspective and can select an alternate viewpoint with the click of the remote. Doron is also working on a musical interactive film, and her foray into this new genre has won her a prestigious TED2010 fellowship.

“I don’t have to fit into previously existing boundaries when I’m exploring film in new ways,” says Doron. “It allows me the luxury of being truly unbound.”