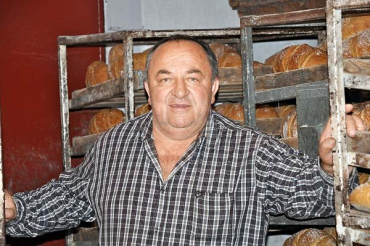 It may be 7 a.m. in Kyiv, but for Maria Strauss in Mukachevo, the dawn has already broken. Along with thousands of other families living in Transcarpathian Ukraine, she considers herself German and sets her clock to German time – one hour ahead of Kyiv.

Strauss, a 74-year-old petite, brown-eyed woman, is a descendent of German settlers who lived on the territory of western Ukraine almost 300 years ago.

German is the first language in her household. Tuning into German radio, she goes to wake up her grandson. “Steh auf, das Essen ist auf dem Tisch,” she whispers in his ear, saying that the food is ready.

Before 1939, some 650,000 Germans lived in Transcarpathia, according to Orest Subtelny, author of history textbooks about Ukraine. Palanka German Cultural Center in Mukachevo, however, notes only 30,000 migrants from Bavaria in the 1920s.

Their leader, Archbishop Friedrich Schoenborn, received some land around Mukachevo – then a part of the Austro-Hungarian Empire, as a gift from Emperor Kaiser Karl VI in the 18th century.

Having settled in villages around Mukachevo, the newcomers were Roman Catholic farmers, masons and wood craftsmen.

They built a railway to transport lumber – the region’s biggest export at the time.

They dug through mountains and ran the first trains. History records in the Palanka center mention Germans starting all types of businesses – from a matchmaking factory to breweries.

“Nobody built houses like Germans,” said Zoltan Lendiel, the mayor of Mukachevo.

A Hungarian himself, he grew up in a German village. “When I was a kid, I remember them hewing stones all the time – painstaking labor.”

Her son works 12-hour shifts as a mechanic at Fischer factory, an Austrian mountain skiing equipment maker. Her daughter-in-law, also of a German descent, is a primary school teacher.

Apart from living by German time, they eat a lot of traditional German food: Knöedel – a German large potato, or bread dumplings and sauerkraut. For tea, Strauss serves Lekvar – a plum jam, which she cooks in summer in her grand-mother’s copper kettle.

The kettle and their brick house – built by grandfather Yosef 88 years ago, are the few things that Maria managed to keep from her German past. She says land and many other valuables were taken away by the Soviet authorities when Austro-Hungarian villages in Transcarpathia were annexed by the Soviet Union in 1945.

At the end of World War II, Josef Stalin ordered massive deportations of non-Slavic people to Siberia and Central Asia fearing they might collaborate with Romania, Poland or Hungary. Strauss’s father and brother were among those sent to the forced labor camps.

Police came to our house and told us to pack warm cloth and food,” Strauss said.

“They said they would take my brother for a three-day work project. Only in a couple of months we found out he had been sent to work in Tbilisi in Georgia after he’d written us a letter from there,” she said of her still-painful memories.

Her father, who was allegedly sent to Siberia, never made it home from the camp.

Many things have changed during the 55 years of communist rule on Transcarpathian land. People learned Russian and Ukrainian, changed their nationality in passports and fitted their homes with Soviet furniture.

Strauss was not an exception: “When the Soviets conducted population census, I listed myself as a Hungarian to avoid bias.”

After Ukraine became independent in 1991, most of Strauss’s compatriots applied for the residence permits to move back to Germany and Austria.

There were at least 50 German families living on Schoenburn Street, named after the German archbishop who initiated the move. “Now there are five,” said Strauss who also lives on this street.

According to Palanka Center, only 10,000 people of German descent still live in the Transcarpathian region.

Strauss, who has most of her relatives in Germany, said that she had been denied a residence permit because of some changes in immigration laws.

“All my relatives moved to Germany and I’m the only Strauss who has to stay in Ukraine. They live better lives than I do.”

Strauss appealed the decision, but was rejected again.

Among Germans who failed to immigrate back to their ancestoral land, there’s Yosef Kaloy whose reasons for staying in Ukraine stand out from the rest.

The 54-year-old stocky farmer from Barbovo, a former German village, refused to move to Germany although his papers allowed him to do so.

“I just don’t want to be cleaning bathrooms and collect unemployment benefits. I doubt I will find a job in Germany at my age,” he said, calling himself “a proud man.”

Yosef comes from a German family named Kobel, but his grandfather Franz changed it to a Hungarian Kaloy to avoid bullying when he worked for the Austro-Hungarian police in 1990.

In addition to developing his 300 hectares of wheat fields, Kaloy opened a bakery.

Baking 1,000 white loafs every day, he is the only supplier of bread to six nearby villages. For his little business, he uses only German-made equipment, including an old white BMW.

“Here I’m a deputy in the village council and a successful farmer, just like my grandfather who taught me to be economical, work hard and tolerate no laziness,” he said.

Despite the longstanding regional German and Roman-Catholic practice to marry within the nationality, Kaloy tied a knot with a Ukrainian partially “to avoid incest,” which started happening within the dwindling community.

“I speak Ukrainian to my wife, but I speak German to my sons and my grandson,” he said of his bilingual marriage.

Graduating from universities in Germany and Austria, both of his sons chose to come back to Ukraine – for good, they said.

Read also 'German ambassador calls for transparency in business and politics' by the same author.