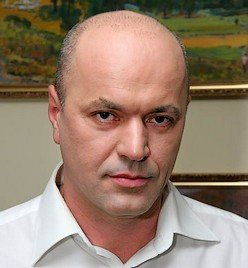 A mayor of a small Ukrainian town who has made headlines for anti-Semitic comments in recent months was approved by his country's central voting committee to run in January's presidential race.

Following his nomination, Uzhgorod Mayor Sergey Ratushniak told a local paper that the Jews were to blame for all his country's troubles.

Ratushniak, who until recently was not known to be anti-Semitic, surprised local Jews when he reportedly called a political rival who is also running for the Ukrainian presidency an "impudent little Jew" who was "successfully serving the thieves who are in power in Ukraine and is using criminal money to plough ahead towards Ukraine's presidency."

The rival, Arseniy Yatsenyuk, is not Jewish.

But according to Sergei Podrazhansky, deputy editor of the Israeli Russian-language newspaper Vesty, Ratushniak succeeded in hurting Yatsenyuk's chances of winning the presidency.

"Many Ukrainians reconsidered their support when they heard allegations that Yatsenyuk is Jewish," said Podrazhansky, who grew up in Uzhgorod.

"There is no democratic tradition in the Ukraine so the place is very unpredictable," added Podrazhansky, who said that Ratushniak is just one of 18 candidates running for president and does not have a chance of winning.

The mayor told the Associated Press in a telephone interview: "Is everybody obliged to love Jews and Israel? If I don't like Jews and Israel, does that make me an anti-Semite?" Local news agencies reported that Ratushniak assaulted a woman working for Yatsenyuk's campaign by grabbing her throat and shoving her to the ground.

However, at the beginning of September, Ukraine prosecutors reportedly brought charges of hooliganism, abuse of office and xenophobia against Ratushniak.


The Mayor of Uzhgorod provokes Jewish pogroms in Ukraine