The leaders of Germany, Russia, Ukraine and France are aiming to meet in Belarus to continue to work to resolve the crisis in Ukraine 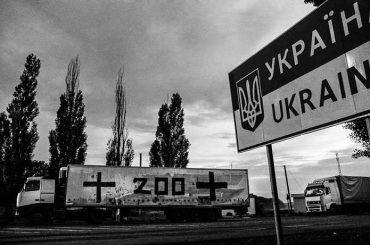 Seibert said the decision follows an "extensive" phone call between the four leaders Sunday morning, during which further measures for a peace plan were discussed.

He said the leaders had worked further on a package of measures "in the context of their efforts on a comprehensive settlement of the conflict in eastern Ukraine."

The aim is to draw up measures that breathe new life into a much-violated September peace plan. Seibert and the French government said preparations for the summit will take place in Berlin on Monday.

They said there will also be a meeting in Minsk by Wednesday of the signatories to last September's accord, including Russia, Ukraine and representatives of separatists in eastern Ukraine.

Britain accused Russian President Vladimir Putin on Sunday of acting like a "tyrant" over Ukraine, but said Kiev's forces could not defeat Russia's army on the battlefield and that only a political solution could end the bloodshed.

The comments, by British Foreign Secretary Philip Hammond, were his toughest yet on Russia and came after he rejected a suggestion that Britain had become an "irrelevance" because it wasn't directly involved in talks with Putin to end the Ukraine crisis.

"Ukrainians can't beat the Russian army, that's not a practical proposition. There has to be a political solution," Hammond told Sky News.

"This man (Putin) has sent troops across an international border and occupied another country's territory in the 21st century acting like some mid-20th century tyrant. Civilized nations do not behave like that," he said.

Russia denies Western and Ukrainian accusations it is supporting pro-Russian separatists in eastern Ukraine by sending regular troops and weapons into the region.

"This is one of the last opportunities that Russia will have to avoid yet further significant damage to its economy that is bound to happen if the intransigence of Vladimir Putin forces the rest of the world to increase and tighten the sanctions," Hammond said of the latest push for a peace deal.

Combined with a steep fall in global oil prices that Hammond said was having a "catastrophic" impact on the Russian economy, the sanctions would force Putin to alter course, he predicted.

"He will have to trim his behavior to reflect the decline in the Russian economy."

Britain was incensed last month after two Russian "Bear" long-range bombers flew over the English Channel, forcing it to reroute civil aircraft. It later summoned the Russian ambassador over the incident.

Newspaper report: Already up to 50,000 deaths in Ukraine conflict.