Storm clouds tower over Ukraine; should Hungary's OTP be looking for a shelter? 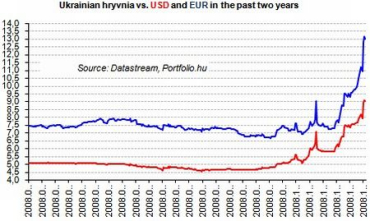 The macroeconomic situation in Ukraine does not bode well for Hungary's OTP, either.

Ukraine is to cut regular earnings for public sector employees by at least 8% in 2009. Moreover, they will not receive a part of their basic salary, loyalty payment and bonuses. Rescheduling of pension transfers is expected as of February. What seems certain at the moment is that the retired will receive their money last.

Ukraine appears to be in a dire situation. The fixed-income market is almost pricing sovereign default. Recession this year is looks likely to be severe, while the country's external debt is staggeringly high (some USD 130 bn) and mostly denominated in US dollars.

The above report indicates that the central state budget is running out of funds. The biggest problem with that - even if the budget's woes begin to be resolved - is that there will be a huge mess in household revenues, which have been easy to plan forward up to date. And if payments to households alternately run dry and pick up, debt repayment can become a serious issue, especially as the UHK instalments on USD-denominated credit nearly doubled already. The banks of course may decide to implement measures that will transitionally alleviate the pains, but these will not remedy the fact that loan portfolios have deteriorated a lot.

The biggest risk for Hungary's largest lender, OTP Bank, continues to be Ukraine. According to the bank's third-quarter (2008) earnings report, its lending amounted to HUF 729 bn in Ukraine. Most of this was USD-denominated, half to households and half to corporates. The loan-to-deposit ratio at OTP's Ukrainian arm is 340%. While OTP claims its Ukrainian loan portfolio is excellent thanks to what was “inherited" from Raiffeisen, our sources at the bank claim a 21% non-performing loan (NPL) ratio that was in a recent analysis is unrealistic. The numbers, however, do serve as food for thought.

At the same time we need to highlight that OTP's equity exceeds HUF 1,100 billion, and its capital adequacy ratio is outstanding. OTP would be under a lot of pressure if more than half of the HUF 729 bn is not paid back, but this does not mean the bank could not weather serious economic woes - provided its portfolio remains stable elsewhere.

We also need to stress that there is not a single analysis on OTP projecting that the bank's portfolio losses will exceed a critical level. Moreover, they all expect OTP's equity to remain very high. Quarterly profits may also be there to mute the impacts of a lingering crisis, but sovereign default is definitely not anything Ukraine and OTP needs.