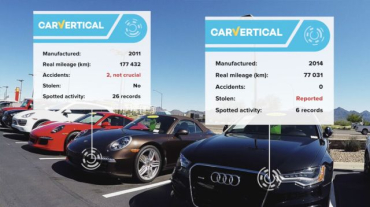 Trust is most important part of any transaction involving a used car. Vehicle history reports can be spotty, especially if the car wasn’t repaired at the dealership. In the end, it’s the word of the salesperson versus your intuition and sense. Could you sniff out an untruthful claim if the situation presented itself?

If you have a CarVertical vehicle history report, you won’t have to do any detective work. That’s because they’re leveraging blockchain technology in order to create the world’s first international car registry. By using blockchain as a ledger for vehicle identification numbers, car data will be free for anyone to access and fraud will be harder to get away with. Unscrupulous dealers can’t roll back the odometer if the car has a detailed history online. The VIN is like ring on a tree trunk, telling stories of the car’s past.

What Does a VIN Tell You About a Car?

The VIN isn’t a randomly generated sequence. In the United States, all 17 numbers have a specific purpose. The first three numbers tell you the country of origin and manufacturer. For example, the VIN number of a Ford Explorer might start 1FO, with the 1 meaning United States and FO meaning Ford. The next four digits tell you about the features of the car, namely the safety precautions and engine size. These are usually used to determine the model of the vehicle.

The next number is a fraud prevention device put in by the federal government called a check digit. A computer algorithm chooses this number to verify the VIN. If this number isn’t correct, it’s a red flag that something nefarious could be going on. The tenth number tells you the year the car was manufactured, the eleventh tells which factory it was made in, and the final five digits are the serial number for that specific make and model. All these details paint a specific picture about the history of a car. If you’ve been told a car is a special edition classic, you can immediately test the veracity of this by looking at one number on the VIN.

Feature of a Vehicle History Report

A CarVertical report takes your VIN number and vehicle history and creates a detailed synopsis of the car on the blockchain ledger. You’ll get breakdowns on past accidents, sales, even possible police encounters. Here’s what a CarVertical vehicle history report looks like:

Vote up!
Vote down!