Conflict in eastern Ukraine cannot be resolved by military means 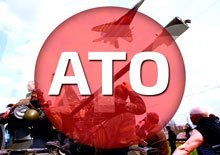 This is what President Poroshenko said in an interview with German newspaper Bild. Russia constantly breaks its promises during the settlement of the situation in Donbas, Ukrainian President Petro Poroshenko has said.

Ukrainian President also criticized Russia, for failure to fulfil its promises. "I can say that Ukraine has implemented all points of the peace agreement that we declared. We are ready for a compromise, and I believe that the conflict cannot be resolved by military means."If we can achieve the withdrawal of Russian troops and close the border, the conflict will be resolved within a few days," - he said.

Ukraine's government has prepared a resolution to compensate households' losses due to hostilities in Ukraine's east, Luhansk governor Hennadiy Moskal said while visiting the region's Stanychno-Luhansky district where he examined destroyed and damaged houses in the villages of Stanytsia Luhanska, Makarove and Valuyske.