EU-Ukraine association agreement not to be amended - Poroshenko 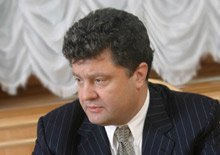 Ukrainian President Petro Poroshenko has said that no amendments will be introduced to the text of the EU-Ukraine Association Agreement.

"There will be no exceptions and amendments in the text that I signed in Brussels on June 27," he said at a press conference in Kyiv on Friday after a meeting with European Commission President Jose Manuel Barroso. Poroshenko said that the agreement had already been prepared for ratification by the Ukrainian parliament. "Any negotiations regarding the terms of the introduction of certain rules, be it phytosanitary control or technical regulations, or the terms of the introduction of certain other rates to protect the domestic market, are the subject of a possible discussion on the Association Council, which has a clear procedure," he said. Poroshenko added that the sides had already held talks about possible compromises on issues related to the Association Agreement and that such negotiations would continue in future.

President Petro Poroshenko pins high hopes for positive results from negotiations on de-escalation of the conflict in eastern Ukraine and believes that it is possible to resolve all disputes with Russia arising from the EU-Ukraine agreement on a Deep and Comprehensive Free Trade Area.

"We will do everything we can, but Russia should behave responsibly as well," Poroshenko said on Friday at the 11th annual conference of the Yalta European Strategy. The conference, which is taking place in Kyiv, not Yalta, presently occupied by Russia, is attended by more than 350 politicians, public figures, businessmen, and journalists from 20 countries. Its title is "A New Ukraine, A New Europe, A New World: To Build and Protect." Poroshenko said that the problems of Donbas, Crimea, and Kyiv should be resolved through democratic and economic reforms.

"Crimea will be with us again and not necessarily by military means. I am certain that we will win the economic, democratic and liberal competition for the minds and attitudes of Crimean residents. The way to resolve the conflict in the east of the country is the same," Poroshenko stated the importance of an EU membership prospect for Ukraine, saying, "The Ukrainians have passed one of the most difficult tests in their life, seeking to become a member of the European Union. We have never enjoyed such a level of support in the world and in Europe and it would be just impolite to deny us the prospect of membership." The President spoke for a new global security strategy and said he hoped that NATO would soon grant Ukraine a special status. He welcomed the new EU sanctions against Russia, saying, "The EU showed its unity and its solidarity with Ukraine, while they have many issues of their own. This is a sign how close Ukraine is now to every leader and to every European country. This decision shows that Ukraine is a priority for the EU." Earlier on Friday, the Official Journal of the European Union published an extended list of Russian individuals, defence and energy companies, and banks liable to EU sanctions. The United States is expected to publish its expanded sanctions list later on Friday.