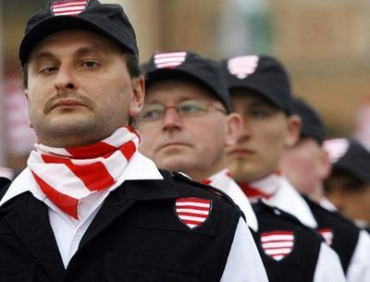 Some 800 people attended a commemoration of the 1920 Trianon treaty organised in Budapest by the Sixty-Four Counties Youth Movement on Saturday afternoon. Participants included around 250 members of the paramilitary Hungarian Guard on a square near Budapest's City Park.

Jobbik considers it one of its main targets that "the Trianon borders should be dropped within a few generations or as soon as possible," Szegedi said.

The three elected Jobbik MEPs in Brussels will first of all demand the abolition of the Benes decrees on the expulsion of Germans and Hungarians from Czechoslovakia after WW2, Szegedi said. German and Austrian MEPs will be invited to work towards the abolition of the decrees, he added.

Jobbik will demand territorial autonomy for Szekler land in Romania and will also press for Transcarpathia in Ukraine to become an independent Hungarian district, Szegedi said.

The group marched from the square to the Slovak, Romanian and Serbian embassies, carrying banners with the text "Justice for Hungary!" and "Down with Trianon!"

Police told MTI that the event had ended without any disturbances or police action.

The Trianon Treaty was signed by representatives of the Allies of WWI and Hungary on June 4, 1920. Under the treaty, Hungary's territory was cut from nearly 283,000 square kilometres to 93,000, and its population dropped from 18 million to 7.6 million.