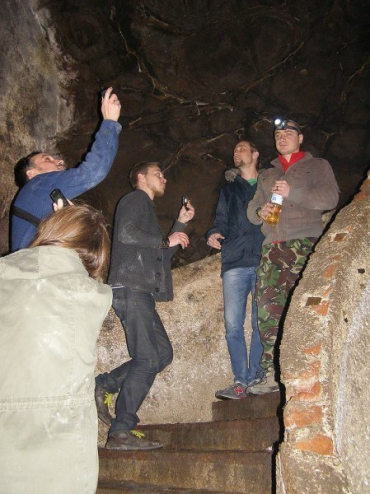 "There were spiders and draught there. So I ammediately thought that there must be a tunnel" - Oleksander Nikitchuk says.

A month ago, he started repairs in the parents' house on Sobranetska street. And he found a dent in the floor. The suspicions were confirmed. It was found out that right under the house there was the once famous underground restaurant "Skala", which was once the calling card of Uzhgorod.
Yesterday, December 3, Oleksandr decided to show us the discovery. Armed with flashlights and appropriate clothing, we began the descent.
First you go down a small ladder into a human-height-deep pit. Then, the most dangerous area - you squeeze you body into a narrow passage (not good for those who suffer from claustrophobia), and then one more obstacle to overcome. And only after that you find yourself in a dark underworld.
To be more precise, we came out in... old restrooms of the restaurant. Now there's only cracked tiles, shelled plaster there. From there, we began wandering in huge and, surprisingly, very straight cellars. Oleksandr said that he had tred to find some maps in the archives, but to no avail.
And here are the steps. People used to go down these stairs to the restaurant, as evidenced by a "roadmap" carved in the stone. The words "Entrance", "Coffee Shop" are well visible. And what is this miracle of white stone?! A huge girl holding a jug over her head stuccoed on the wall. They say that it is the work a prominent Transcarpathian painter Fedir Manaylo!
It was an incredible experience. It's something like a time machine, when you find yourself in another century, you begin to imagine how waiters were walking here, people relaxing. We also found the main entrance to the restaurant, It was in a nearby cafe. There is a massive metal door there, that is now "barricaded" with supplies of vodka, beer...
The restaurant has been closed for almost 30 years. It would be interesting if someone would revive the former well-known tourist, gastronomic and romantic attraction of Uzhgorod...