In Ukraine, Corruption Concerns Linger a Year After a Revolution 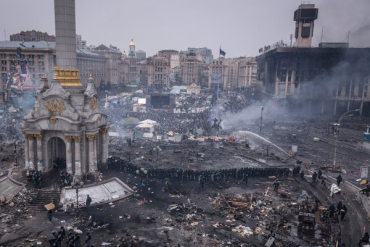 The country is on the cliff of bankruptcy. A spate of politically motivated killings and mysterious suicides of former government officials has sown fear in the capital. Infighting has begun to splinter the pro-European majority coalition in Parliament. And a constant threat of war lingers along the Russian border.

A year after the election of Petro O. Poroshenko as president to replace the ousted Viktor F. Yanukovych, and six months after the swearing in of a new legislature, Ukraine remains deeply mired in political and economic chaos.

“Poroshenko, whether you like him or not, he’s not delivering,” said Bruce P. Jackson, the president of the Project on Transitional Democracies, an American nonprofit group. “The Ukrainian government is so weak and fragile that it is too weak to do the necessary things to build a unified and independent state.”

Efforts to forge a political settlement between the government in Kiev and Russian-backed separatists who control much of the eastern regions of Donetsk and Luhansk have hit a deadlock over procedural disputes, despite a cease-fire in February calling for decentralization of power and greater local autonomy as the linchpins of a long-term accord.

The shattered economy keeps sinking, with the G.D.P. plummeting 17.6 percent in the first quarter of 2015. Hoping to avoid default, senior officials have been in protracted negotiations with creditors, but they have failed so far to secure a deal. Officials also now fret openly that more than $40 billion pledged by the International Monetary Fund and allies, including the United States and the European Union, will not be enough to keep the country afloat.

In perhaps the greatest disappointment to the protesters who seized the center of Kiev last year, the new government led by Mr. Poroshenko and Prime Minister Arseniy P. Yatsenyuk has so far failed to deliver on promises to root out endemic corruption. Instead, it has become ensnared in new allegations of misconduct and charges of political score-settling.

The Parliament, in which pro-European parties control a huge majority, voted last month to create a special committee to investigate accusations that Mr. Yatsenyuk, a suave English speaker admired in the West, and his cabinet have presided over the embezzlement of more than $325 million from the state.

The government and its supporters deny any wrongdoing and say it has gone further than any of its predecessors in trying to shake off Ukraine’s post-Soviet legacy of mismanagement and malfeasance. They point out that Parliament has adopted a slew of reform initiatives, notably an overhaul of the notoriously crooked natural gas industry and installing new leadership at the national bank.

The continuing disarray is becoming a source of friction between the Ukrainian government and its European allies, especially Germany and France, whose leaders helped broker the cease-fire and are increasingly frustrated with the slow pace of change.

“We don’t have simply Russian aggression against the victim Ukraine,” Mr. Jackson said. “We have a predictably aggressive Russia against an unpredictable and unreliable Ukraine. Ukraine is now seen as not to be trusted. What the E.U. is saying is: Where is the decentralization? Where is the commitment? Where are the reforms?”

Not surprisingly, public confidence in the government has slumped, as well.

Adding to the tumult, Mr. Poroshenko recently declared a crackdown on the country’s richest and most powerful businessmen, known as oligarchs, in a bid to curtail their influence and to win back popular support. Yet the assault risks making enemies of the country’s biggest employers, who until now have backed the government.

“When you don’t want to do anything and you don’t have anything to report on what you have already done, you need an enemy,” said Dmitry V. Firtash, a former patron of Mr. Yanukovych who is a major target in the so-called de-oligarchization campaign. “It’s very convenient to use rich people as scapegoats.”

For Kiev, there is no greater problem, and no greater test, than the as-yet futile fight against corruption. Even officials on the forefront of the effort say it has so far largely gone nowhere.

David Sakvarelidze, the deputy prosecutor general, who helped carry out sweeping changes to the judicial system in his native Georgia, has been given Ukrainian citizenship and a mandate to overhaul the prosecutor’s office.

“They are still corrupted, and no systemic changes have been made in law enforcement agencies and in courts,” Mr. Sakvarelidze said in an interview in his office in Kiev.

He described a criminal justice system that needs to be rebuilt nearly from scratch. For example, he said, there was no effective system of plea bargaining to allow prosecutors to resolve cases swiftly, and no clear goals that set national priorities in law enforcement.

“We do not have any criminal policy,” he said. “None of the prosecutors have clear guidelines.”

Instead of existing government agencies taking action, Mr. Sakvarelidze said, the Parliament has been overly focused on adopting legislation that creates even more bureaucracy.

One of the major promises to come out of the Maidan revolution was a new anticorruption bureau, which is expected to employ 700 enforcement officers. On April 16, after long delays, Mr. Poroshenko finally selected the bureau’s first director, Artem Sytnyk, a former Kiev city prosecutor.

Because of the delays, the government has been unable to deliver on pledges of swift restitution. Most notably, it has failed to recover any of the billions of dollars believed to have been stolen by the former president, Mr. Yanukovych, his family and closest associates.

Nor have Mr. Yanukovych or any of the senior officials who fled with him been arrested, with many now in Russia. Corruption investigations against other former officials and executives of state-owned companies have largely stalled.

Egor Sobolev, an organizer of last year’s protests who is now a member of Parliament and chairman of its Committee on Corruption Prevention and Counteraction, said his panel was flooded with complaints.

“The biggest problem in the country is we do not have a real system of justice, we do not have judges, most of them are people from Yanukovych’s time, very corrupted,” he said. “The same situation with prosecutors.”

“And another problem, a very big problem,” he added, was that “Mr. Poroshenko as the president is not ready to fire them.”

Mr. Sobolev is not alone in his lack of trust in the new government. Many of the Maidan demonstrators who are now in government posts say they are uncomfortable with Mr. Poroshenko and Mr. Yatsenyuk, who were opponents of Mr. Yanukovych but also longtime veterans of the Ukrainian political system that the demonstrators wanted to dismantle.

This is one reason there was strong support in Parliament to create a special committee to investigate allegations by Nikolai Gordienko, the former head of a state financial inspection agency, who accused Mr. Yatsenyuk’s government of benefiting from a major embezzlement scheme.

To a great extent, the frustrations are to be expected, analysts say. “A year out, everybody is always disappointed from any revolutionary upheaval, that’s a statement of social science law,” said Michael A. McFaul, a Stanford University professor and former American ambassador to Russia who is an expert on revolutions and visited Kiev last month.

“There’s never a case where people are saying, ‘Oh, things are going even better than I thought.’ It’s always, ‘The government is not doing enough.’ It’s always, ‘Reform is slow.’ ”

Mr. McFaul said that he had hope for Ukraine’s efforts. “I am impressed with the number of reforms that they have already passed. I think that is underappreciated in the West,” he said.

Still, he said, the task ahead is gargantuan, especially given the demands of Western benefactors. “They just don’t have the state in place to do the kind of things they are being asked to do right now,” Mr. McFaul said.

Boris Lozhkin, Mr. Poroshenko’s chief of staff, said the president had five priorities: “de-shadowing, de-monopolization, de-oligarchization, deregulation and decentralization,” with de-shadowing referring to bringing new transparency to the economy and the government.

“The oligarchy as a basis of the country’s political and economic life must cease,” Mr. Lozhkin said.

But the confrontation has only added to a sense of fear in Ukraine, particularly among business figures and officials who had ties to the Yanukovych government.

At least six such officials have died in apparent suicides this year, and a seventh, Oleg Kalashnikov, a former member of Parliament from Mr. Yanukovych’s Party of Regions, was shot dead outside his home in Kiev last month.

Prosecutors have opened investigations but say they do not believe the killings and suicides are connected.

While the government says it fears a renewed invasion by pro-Russian forces could come at any time, some analysts said there was little reason for renewing hostilities while the Ukrainian side was fighting with itself.

“Russia is just waiting for the internal problems of Ukraine to make it less attractive for the West,” said Alexander Baunov of the Carnegie Moscow Institute, a research group. “Putin’s hope is Russia doesn’t need to make Ukraine weak. Ukraine will be weak by itself, and he can just wait awhile and take advantage of its weakness sometime in the future.”