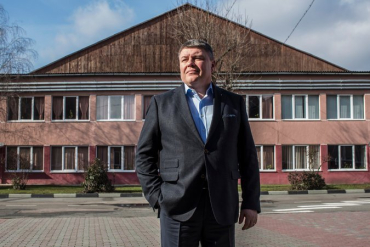 MUKACHEVO, Ukraine — Before gliding along trails or sliding down slopes, many of the world’s skis start at this bustling, sprawling factory in western Ukraine.

Here, skilled machinists combine wobbly ribbons of carbon fiber and thin sheets of stiff titanium, stacking them like cake layers, and then heat-pressing, shaping and polishing them into finished slats for cross-country or downhill use.

Here, too, craftworkers steam and bend wood into the sticks used by hockey players around the world under brand names that include Nike and Oxelo.

The factory’s Austrian owner, Fischer Sports, pays employees the equivalent of about $307 a month on average — perhaps one-eighth the amount that skilled woodworkers and machinists might earn in Fischer’s home country.

And since January, when a new free-trade pact between Ukraine and the 28-country European Union took effect, Fischer’s costs have been further reduced by the elimination of tariffs on the machinery and raw materials flowing into the country and the finished goods that are shipped back out.

The pay may seem paltry by Western standards, but the factory’s 1,500 workers tend to see the jobs as an opportunity. Ukraine is one of the Northern Hemisphere’s poorest countries, with an economy that generates less than $3,100 a year per person.

“Europe is our future,” said Yuri V. Oros, a machinist on the ski line.

But that future is clouded by Ukraine’s recent troubled past, the country’s hostilities with Russia and the nationalism now threatening the solidarity of the European Union. In a recent nonbinding Netherlands referendum, for example, nearly two-thirds of Dutch voters urged their government to rescind its support of the Ukraine pact.

Workers at the Fischer-Mukachevo factory polishing carbon-fiber automotive parts. Credit Brendan Hoffman for The New York Times
And even as Fischer and some other multinational companies, including Nexans, a French maker of electrical wiring, have invested in Ukrainian operations to take advantage of the free-trade arrangement, many other companies are hesitant to venture into this former Soviet republic.

So it is unclear how far any benefits of the trade pact might carry beyond the western edge of Ukraine near the Polish border, where most of these factories are situated, and into the broader economy in this country of 44.4 million, about 5 million of whom are now living in areas claimed by Russia or pro-Russian separatists.

“We will have episodic, anecdotal success stories, but it’s too early to call it a success,” said Tymofiy S. Mylovanov, president of the Kiev School of Economics.

Over all, Mr. Mylovanov said, Ukraine’s economy is barely growing, stunted by low labor productivity and widespread corruption. Only over the long run, he said, might the trade agreement help lift Ukrainians from poverty.

The accord, called the European Union Association Agreement, has already had a tortured journey. After a former Ukrainian president rejected it in 2013, opting instead for a deal with Moscow, pro-Europe citizens took to the streets in Kiev in protests that led to a revolution.

The new government in Kiev pivoted back to the European agreement, signing it in March 2014. But that same month Russia annexed the Ukrainian province of Crimea, inciting a Russian-backed civil war in eastern Ukraine.

By the time the European Union trade pact took effect as scheduled, many Ukrainians were so distracted or demoralized by war and years of recession that they hardly noticed.

Yet, here in Mukachevo, a picturesque town of cobble-paved roads and a 14th century hilltop castle left over from the Austro-Hungarian Empire, the Fischer plant provides a glimpse of what the future of greater European integration could mean for this country.

The New York Times
Fischer’s Ukranian subsidiary, privately held, does not disclose financial figures for the factory. But executives say they expect benefits of the trade pact to add about 500,000 euros, or around $565,000, to the factory’s profits this year.

“Ukraine has all the preconditions for investment,” Vasyl Ryabych, the factory’s director, said in an interview in his office, which overlooks the factory’s groomed lawn surrounded by rose hedges.

In the same way the North American Free Trade Agreement in 1994 spurred a surge of light-industry manufacturers — the so-called maquiladoras — along Mexico’s border with the United States, the association agreement is meant to encourage development along Ukraine’s borders with the European Union. In turn, Ukraine is obliged to alter domestic economic policies through measures like overhauling the judiciary and changing rules for awarding state contracts.

The Fischer plant is only one of the signs of foreign investment popping up around Lviv, the regional capital of western Ukraine.

Nexans, the French company, recently rented land near Lviv where it plans to spend 120 million hryvnia, or about $4.7 million, on a factory that would put 2,000 people to work making automotive wire. Another Nexans plant in the region already makes wiring for BMW, General Motors and other carmakers.

Leoni, a German competitor to Nexans, operates a factory in Stryi, in the Lviv region, making cables for Volkswagen, Opel, Porsche and others.

And Fujikura, a Japanese car parts maker, last fall announced plans to open a factory in the next three years that would employ about 3,000 Ukrainians.

“The economy is orienting toward Europe,” said Veronika Movchan, an economist at VoxUkraine, a research organization in Kiev.

Vasyl Ryabych, general director of the Fischer-Mukachevo factory, at the factory in Mukachevo, Ukraine. The plant fabricates skis as well as hockey sticks, many of which are produced for export. Credit Brendan Hoffman for The New York Times
The tilt westward has increased Ukraine’s trade with the European Union to more than a third of the country’s total imports and exports, compared with less than a quarter in 2012.

During that same span, however, Ukrainian exports to Russia fell by more than half, to 12.7 percent — a share that could slip further because Moscow has put tariffs on goods from Ukraine in retaliation for the European trade pact.

And tariff-free trade with the European Union is a two-way street: As more European products compete with local goods, Ukraine might fall short of even its modest forecast of 1 percent growth this year, some economists now say.

The trade pact also placed tight restrictions on agricultural imports into the European Union, despite agriculture being one of Ukraine’s strengths. The quotas for tariff-free honey imports are so low, for example, that Ukrainian beekeepers used them up in the first six weeks of the year.

“If Ukraine has any hope at all, it is agriculture,” said Ivan Tchakarov, chief economist for former Soviet states with Citi. “But the fact that they’ve used up most annual quotas already suggests this agreement is not having the desired effect.”

All the more reason that supporters of the trade pact are counting on continued success from the Fischer plant, which is already branching out beyond skis and hockey sticks.

Having demonstrated its agility in handling carbon-fiber materials, and noting the regional growth in car parts, the factory has set up a workshop that takes on the labor-intensive work of polishing components for the auto industry.

The sleek, lightweight parts include engine mounts for high-performance BMW M3 models and exterior panels for Audi, Porsche and Tesla. After the polishing, the parts are shipped back to wealthier markets.

“We’re like China,’’ said Mr. Ryabych, the factory director, “but on the border with Europe.”