Yatseniuk offers his composition of government 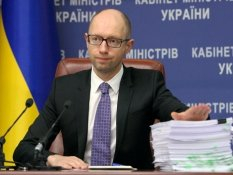 Ukrainian Prime Minister and People's Front leader Arseniy Yatseniuk has offered the participants of the future coalition in the Verkhovna Rada his version of the composition of a new government.

He said this at a press conference on Friday, a Ukrinform correspondent reported.

"As for the list - it's a request. It is the beginning of a public debate. No one has an absolute right or absolute truth. But I appeal to everyone: we have no time, and we need to urgently form the government. The International Monetary Fund will begin talks exclusively with the new composition of the Cabinet Ministers," he said.

The new government, in his opinion, should introduce the post of deputy prime minister for agriculture, "who will be responsible for Ukraine's formation as a leader in the global food market." He proposed that Ivan Miroshnichenko from Samopomich Union take up this post.

Yatseniuk also asked Batkivshchyna to delegate Ihor Zhdanov to the government for the post of deputy prime minister for humanitarian affairs.

He said he would like to see incumbent Deputy Head of Ukraine's Presidential Administration Dmitry Shymkiv as minister of economic development.

Yatseniuk also asked the Bloc of Petro Poroshenko to delegate Leonid Kozachenko to the post of agriculture minister, "as an experienced specialist."

It was also proposed that Andriy Kobolev head the Energy and Coal Industry Ministry and Pavlo Rozenko the Social Policy Ministry.

At the same time, Yatseniuk proposed nominating well-known swimmer Denys Sylantiev as youth and sports minister, Yuriy Stets as chairman of the State Committee on Television and Radio Broadcasting, and Hanna Hopko as environment minister.

As for the defense and foreign ministers whose candidacies are tabled in parliament by the president, Yatseniuk said: "As leader of a political force, I want to state that we are ready to support the candidacies of the president. These are incumbent Defense Minister Stepan Poltorak and incumbent Foreign Minister Pavlo Klimkin. They will get full support from our political force."

"I appeal to all political forces to fulfill our sacred duty to the country - quickly form a coalition, sign [a coalition agreement], form a government - and let's begin to work," Yatseniuk said.