12 killed, 31 wounded in shootings at Fort Hood in USA 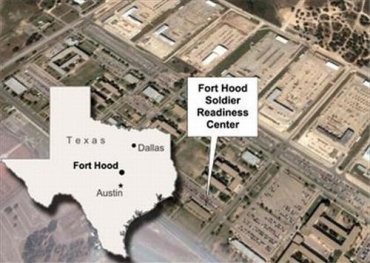 The U.S. Army has closed its massive Army base at Fort Hood, Texas, after a mass shooting at the post. 12 are dead, including a police officer with the Fort Hood military police, and 31 wounded.

All the casualties took place in the initial incident at the sports dome, now known as the soldier readiness area, at 1:30 p.m.

A General says the confirmed shooter, who used handguns, was killed. 2 others are in custody. All were U.S. soldiers.

The official said Hasan, believed to be in his late 30s, was killed after opening fire at the base. The official spoke on condition of anonymity because he was not authorized to discuss the case publicly.

The official says investigators are trying to determine if Hasan was his birth name, or if he changed his name and converted to the Islamic faith at some point in his life.

President Barack Obama describes the incident as a "horrific outburst of violence." He says he doesn't yet know all the details but promised the government would get "answers to every single question."

The commander in chief says it's a tragedy to lose a soldier overseas and even more horrifying when they come under fire at an Army base on American soil.