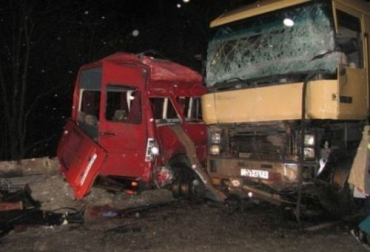 The collision between a truck and a minibus killed seven and injured eleven people near Rivne airport, Rivne region, January 19, a well-informed source in the State Automobile Inspectorate in Rivne region.

The minibus with 18 passengers was going from Ternopil region to Rivne.

According to the preliminary data, the minibus skidded on a slippery road into the oncoming lane and collided with the truck.

Among the passengers in the bus there were pilgrims, 9 adults and 9 children who were returning from the St. Anna spring where they celebrated Epiphany, the source noted.

The investigative team headed by the chief the regional police department, Vasyl Lazutko, is working at the scene of the road accident.

The traffic in Dubnivska Street, Rivne (towards Dubno) has been stopped.

The Ministry of Emergency Situations of Ukraine has reported that the collision between the Volkswagen minibus and the Renault happened near the village of Velyka Omeliana, Rivne district, at 5:12 p.m.

Seven victims with injuries of various severity levels were taken to Rivne hospitals.