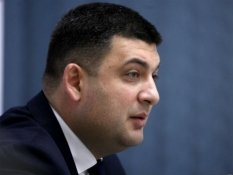 A total of 359 MPs voted for such a decision. Hroisman's candidacy was supported by the coalition. In his speech, Hroisman promised to make every effort to restore confidence in the parliament.

"We have to turn the Rada not into a brake, but into an engine of reforms... We must do everything to restore confidence in the Ukrainian parliament. And I see this as a task of the Verkhovna Rada chairman," he said. He also said that he would do everything to make Ukraine "a prosperous European country." After Hroisman's election as parliament speaker Ukrainian President Petro Poroshenko greeted him with flowers.

The head of the temporary presidium of the Verkhovna Rada, Volodymyr Hroisman, has announced the creation of a coalition of 302 MPs in the new parliament, Ukrinform has reported.

"Our coalition has been set up in a Ukrainian European parliament by a constitutional majority of 302 MPs," Hroisman said.

The chairman of the group on preparations for the first meeting of the Verkhovna Rada, Volodymyr Hroisman, has announced the creation of six factions in parliament, a Ukrinform correspondent has reported.