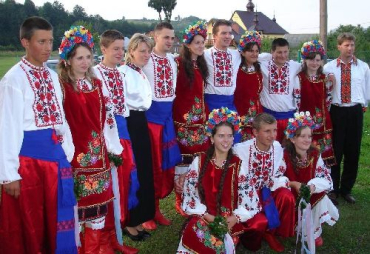 When John Righetti looks at the United States, he sees how differently we celebrate the holidays, pick food for our dinner plates and mourn our loved ones. And, he says, it's what makes our country so great.

"The idea of the United States as a melting pot is a fallacy," said Mr. Righetti, 52, of Ohio Township. "We did not melt at all. We each carry a value system and traditions that come out of our heritage, and that's not going away."

Born in the United States of Italian and Carpatho-Rusyn descent, Mr. Righetti has worked for more than 30 years to teach people about the history of Carpatho-Rusyn culture.

The Carpatho-Rusyn people are a small East Slavic group from the Carpathian Mountain chain of Eastern Europe. Their homeland was contained in Austria-Hungary for 1,000 years, but since the end of World War II, it has been divided among Slovakia, Ukraine, Poland, Hungary and Romania, with large immigrant populations in the Czech Republic, Croatia, Serbia, Canada and the United States.

Mr. Righetti's efforts to tell others about his culture have included everything from teaching the culture's traditional dances and starting the Carpatho-Rusyn Society to leading tours through the Rusyn Homeland and visiting schools to teach children about his heritage.

Now, he is serving as the North American representative to the World Council of Rusyns, the coordinating body for Carpatho-Rusyn cultural activity internationally. The council was founded in 1993, a few years after communism fell in Eastern Europe, and Rusyns -- whose cultural identification had been illegal in all of the above nations except Serbia and Croatia -- revived their cultural activity internationally. The council is headquartered in Presov, Slovakia, and meets several times a year.

"We Rusyns are like other stateless people -- like Roma [gypsies], Alsatians or Kurds. Since we have no state of our own, we, the community, gather and determine our strategies for how to keep our culture alive," said Mr. Righetti, who works as vice president of strategic relationship management at Butler Health System in Butler.

"It's not easy, but it is doable. In a globalized society united by technology, there is no reason a stateless people can't survive and thrive today."

About 1.2 million Rusyns live in Europe, with another 650,000 in North America and small populations in South America and Australia.

Being aware of our heritage will be important as we move into an increasingly globalized world and interactions with people from others countries becomes commonplace, he said.

"It's not about patriotism or lack thereof. It's just people are increasingly identifying themselves out of the cultures they come and not the nations in which they live," he said.

Mr. Righetti, who grew up in Monessen, has been interested since his youth in Carpatho-Rusyn cultural affairs. In the mid-1970s, he founded and directed the Carpathian Youth Choir and Dancers of Monessen and for 10 years taught Carpatho-Rusyn song and dance to a number of ethnic performing ensembles.

In 1994, he led a group of young Rusyn Americans to create the Carpatho-Rusyn Society. With Mr. Righetti serving as president from the start, it has become North America's largest exclusively Rusyn cultural organization, with 10 chapters and nearly 2,000 members.

Members of the society have developed the nation's first Web-based Rusyn radio programming and created two permanent Rusyn displays at the Senator John Heinz History Center in the Strip District, among many other activities. The group in 2004 also acquired a former Rusyn Cathedral in Munhall and has been converting it into the National Carpatho-Rusyn Cultural and Educational Center to educate Rusyns and non-Rusyns about Rusyn culture.

People say to me, 'It's so great you've preserved this,'" said Mr. Righetti, noting that his family also has customs born out of his Italian heritage and his wife's Irish heritage. "And I say, 'I'm not preserving it. We just live this way.' "