Commemoration for those who died in the street - Kiev 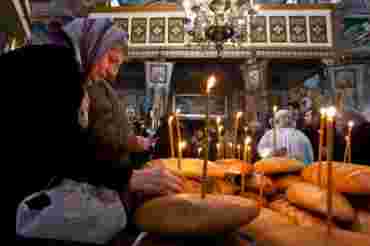 Since early February, when severe frosts came to Ukraine, more than 150 people have died in the country, according to the Ministry of Emergency information. Most of them - homeless. Unfortunately, the realities suggest that this figure is not true. Real one is much more bigger. For the sake of "saving" the statistics Ukrainian officials rewrite "death from hypothermia," for cancer, stroke, cirrhosis, and dozens of other diseases.

In the day of remembrance of all who passed this world, a memorial service for all those who died on the street were served at Holy Ascension Church in Demeevka. The event was organized by "Friends of the Community of St. Egidio" charitable organization, which holds similar prayer service for the seventh time. However, in the church - the first time.

At the memorial service, in addition to numerous members of the community, about one hundred stray capital come to remember their friends. Father Paul, pastor of this Church, who has long been a good friend of the organization, kindly takes all in his parish.
After the service people were served with a modest funeral dinner - buckwheat, cabbage, bread and hot tea with cakes. All this prepares the servants of father Paul.

"The tradition of the burial service came in 2006 when Mila, a woman with gypsy nationality from Transcarpathia, frozen on the street. She came to Kiev to work. At this time she met the "Friends of Community of St. Egidio". During the severe frost, she was kicked out of a rented for penny apartment near Kiev. Her small kids she managed to her relatives but had to stay on the street by herself. Her first night away from home became the last - in the city center - near the shopping center "Arena" - she was found dead in the morning. The woman died of hypothermia, "- said Yuri Lifanse, volunteer of " Friends of Community of St.Egidio ".