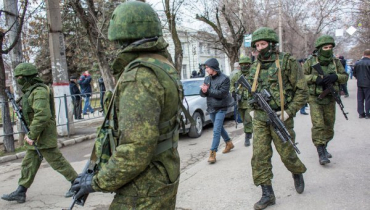 All those responsible for situation in Ilovaisk to be punished
1 сентября 2014 г., 14:38:00
The situation in the Ilovaisk area remains very difficult and details will be disclosed after the operation, National Security and Defense Council (NSDC) spokesman Andriy Lysenko has said."The operation to remove a Ukrainian military unit from the encircled area continues. The details of this operation will not be disclosed until it is over," he told a briefing in Kyiv on September 1.

Ukraine welcomes European Council conclusions
1 сентября 2014 г., 13:20:00
Ukraine has welcomed the conclusions of a special European Council meeting of August 30, in which the EU leaders expressed their solidarity with Ukraine and the Ukrainian people, recognized the fact of Russian aggression and urged Moscow to withdraw its troops from Ukrainian territory, reads a statement posted on the Web site of the Ukrainian Foreign Ministry.

EU could provide EUR 1 billion loan to Ukraine after IMF's conclusions
1 сентября 2014 г., 13:04:00
European Commission President Jose Manual Barroso has said that the European Union (EU) is ready to provide a EUR 1 billion loan to Ukraine after the relevant conclusions of the International Monetary Fund (IMF)."Over one billion more (in loans) could be released in the coming months, and we are ready to consider further financial assistance should additional needs be identified by the IMF during its next review mission," he said at a briefing after a meeting with Ukrainian President Petro Poroshenko in Brussels .

Interbank currency market opens with fall of currency exchange rates
1 сентября 2014 г., 12:51:00
US dollar on the interbank market fell by 70 kopecks, the euro fell by

Elite battalion being formed in Dniepropetrovsk
1 сентября 2014 г., 12:30:00
It will consist of more than five hundred soldiers who have military experience.

Gas talks between Ukraine, Russia, EU to be continued
1 сентября 2014 г., 12:10:00
Ukrainian President Petro Poroshenko is sure that the gas talks in the Ukraine-Russia-EU format will be successful.

Poroshenko promises personnel decisions due to latest events in eastern Ukraine
1 сентября 2014 г., 11:26:00
Personnel decisions will be made following an analysis of the events of the last week in the area of the anti-terrorist operation ( ATO) in eastern Ukraine, Ukrainian President Petro Poroshenko has said."We are now thoroughly analyzing the events of the last week. The conclusions will be serious, including in terms of staff," he said during events to mark the Day of Knowledge at Kyiv Bohun Military Lyceum on September 1.

Poroshenko: Europe must adequately respond to flow of Russian troops into Ukraine
1 сентября 2014 г., 10:31:00
Ukrainian President Petro Poroshenko said he hopes that EU member states leaders will have an adequate response on the act of aggression committed by Russia against Ukraine.Presidential press secretary Sviatoslav Tseholko wrote on Twitter that Poroshenko said this during a meeting with EU leadership in Brussels on August 30.

EU leaders to decide on further sanctions against Russia over aggression in Ukraine
1 сентября 2014 г., 10:16:00
"All ministers expressed deep concern about the recent aggression by regular Russian forces," Ashton said at the close of the informal talks between EU foreign ministers in Milan on August 30.

EU ready to impose strong sanctions on Russia
1 сентября 2014 г., 9:42:00
European Commission President Jose Manuel Barroso said today the EU was prepared to toughen sanctions against Russia over the Ukraine crisis."We are ready to take very strong and clear measures but we are keeping our doors open to a political solution," Barroso said at a briefing following the meeting with Ukrainian President Petro Poroshenko.

Twenty-eight Ukrainian troops get out of encirclement in Donetsk region
1 сентября 2014 г., 9:30:00
The first team of Ukrainian soldiers encircled by the militants in Ilovaisk, the Donetsk region, have managed to break out. "Our first troops from the Ilovaisk group have reached the National Guard brigade's strongpoint in the town of Komsomolske. Altogether there are 28 persons from battalions of Interior Ministry Peacekeeper (14), Kherson (3) and Dnipro-1 (11). It was good idea to hold the border the whole night! We're waiting for other guys," the Interior Ministry's press service quoted minister Arsen Avakov as saying on August 30.