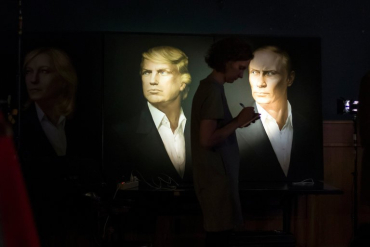 The victory of Donald J. Trump declared early on Wednesday was an unexpected bonus for the Kremlin, which had used the long, tortured United States election campaign to prove the global reach of its disruptive disinformation operations and to cast doubt on the entire Western democratic process.

In some ways the result was less important to President Vladimir V. Putin than the fact that Moscow could exploit the campaign as evidence that the West was in chaotic decline.

Mr. Putin coolly congratulated Mr. Trump on his victory on Wednesday, expressing hope that the two could work together in a “constructive dialogue” to solve international crises, including the issue of security, according to the official Kremlin website.

Speaking at a Kremlin ceremony to welcome new ambassadors to Moscow, the Russian president said that the Kremlin had heard Mr. Trump’s campaign slogans about resuming and restoring ties with Russia and was ready to cooperate, even if it involved a “difficult path.”
Continue reading the main story

Mr. Putin repeated his mantra from the superpower past that the two nations had a special responsibility to “sustain global stability and security.”

Still, there was no mistaking the enthusiasm with which the Kremlin viewed Mr. Trump’s ascension. His lack of foreign policy experience, questioning of NATO, open admiration for the Russian leader and seeming acceptance of Russia’s annexation of Crimea all seemed to play into the Kremlin’s hands.

Prominent analysts gloated about the opportunity this presented for Russia to extend its global influence and, possibly, shed economic sanctions imposed by the United States and Europe over Crimea and Ukraine.

Donald J. Trump and Vladimir V. Putin have exchanged many compliments over the past year. We looked at the basis of the mutual respect between the two men who have never met.

“Undoubtedly, they are drinking champagne, and for two reasons: one is political, the other psychological,” said Gleb O. Pavlovsky, a political consultant who once worked for the Kremlin.

The political reason is that Russia benefits from disarray in the global order, he said, and psychologically the Kremlin feels more in tune with the anti-establishment view of Trump. Overall, he and others said, there is joy that the liberal establishment in the West has suffered another defeat.

The mood extended beyond the Kremlin. The state-controlled news media has given constant attention to the campaign, particularly to the fact that Mr. Trump, far from demonizing Mr. Putin, as most Western politicians do, praised him as a strong leader.

“Trump said he respects the president,” said Maria V. Katasonova, 21, the organizer of a Trump support party at the Union Jack pub in Moscow that went on all night. “He said he will talk to Russia. It is a positive moment that will turn down the temperature of international relations.”

There was little love for the Democratic nominee, Hillary Clinton. Mr. Putin has always accused her of supporting the mass demonstrations that greeted his return to the presidency in 2012, and senior officials repeatedly derided her as one of the key architects of regime change that, in the officials’ view, brought war and chaos to Libya, Syria and Ukraine.

“A lot of Russians like Trump,” said Ms. Katasonova, who was wearing a blue Trump-Pence T-shirt. “ One phrase explains it: ‘war and peace.’ Hillary is war, Trump is peace.”

By dawn, the crowd of supporters had dwindled to about a dozen from 100 the previous night. Still drinking whiskey and beer, they cheered every announcement of a Trump win on CNN.

The wall of the bar was decorated with dewy portraits of Mr. Putin, Mr. Trump and Marine Le Pen, the leader of the far-right National Front in France. Russia has given financial backing to Ms. Le Pen, a major critic of the European Union and Europe’s welcome mat for immigrants, and other organizations on the far right and far left in Europe.
Photo

Ever since annexing Crimea in March 2014, Russia has heightened a disinformation campaign in the West, painting it as violent, disorderly, flooded with immigrants and inherently undemocratic. Drawing from traditions developed during the Cold War, the “active measures” promoted by Russia included fake coverage about rape by immigrants, or arms sales to the Middle East.

News outlets like the RT satellite television network and Sputnik show Western Europe as awash in demonstrations. They also supported the vote in Britain to leave the European Union, known as Brexit.

If Europe was important, however, finding the means to sow doubt and insecurity about the political system in the United States, the last remaining superpower, was the big prize.

Television has been relentless in trying to paint the American system as flawed, suggesting that the process was not better than that in Russia. One prominent Russian politician even joked about it before the votes came in.

Gennadi A. Zyuganov, the longstanding leader of the Communist Party, said that Mrs. Clinton was smart but not good for Russia. “If Americans will vote honestly, I think Trump will make it, but if they will vote like here, then Hillary will win,” he said.

If the Cold War was rooted in ideological differences, the new Russian goal is to show that all political systems are equally bad. Also by interfering in conflicts like those in Ukraine and Syria, Mr. Putin has sought to reassert Russia’s role as a global power to be reckoned with.

Dmitry Kiselyev, the most prominent anchor on state television, called the United States election campaign the dirtiest in that country’s history, saying it provoked “disgust” toward what is somehow still called democracy. He also said that whoever was elected would not be legitimate and would face constant legal challenges.