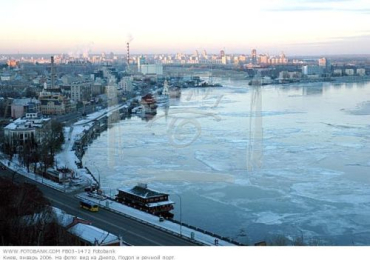 Investigating the attitude of ancient Ukrainians towards nature, experts conclude that our ancestors were very ecologically-minded. This means that they lived in harmony with nature and used its resources sparingly, realizing the interdependence that existed between the flora and fauna and themselves. For example, they treated water as if it had a soul of its own, and therefore kept water bodies in order — it was a part of our ancestors’ mentality.

However, within a fairly brief short period of time this mentality changed completely, and now, according to what Tryzuby Stas, “we are investing our conscience into property and real estate.” For example, experts found out that water in the Dnieper River, which is being used by two-thirds of Ukraine’s population (some 30 million people), is classified as “polluted” and “heavily polluted” based on the level of its chemical and bacterial pollution. In general, 88 percent of all the rivers in Ukraine are in bad to catastrophic condition, i.e., they are not appropriate for all kinds of water usage, experts say. Tetiana TYMOCHKO, first deputy head of the All-Ukrainian Ecological League, has told The Day about how we manage to survive in this situation and what can be changed. The interview was scheduled in conjunction with the World Water Day.

Ms.Tymochko why do you think the situation with water pollution in Ukraine continues to be bad?

“Experts say that only two percent of water on the planet is fit for consumption, and 80 percent of it is in the glaciers. The drinking water in rivers and lakes makes less than 0.001 percent of the global water supply. According to United Nations Secretary-General Ban Ki-moon, the consumption of water resources has already reached a critical point, yet the demand will continue to grow.

“With the local water resources of 1.000 cubic meters per a person Ukraine is considered to have one of the scantiest water supplies in Europe. At the same time, it is not implementing strict special-purpose programs to preserve drinking water supply. It has to be emphasized that until 1991 there was no economic punishment imposed for water pollution. The generally accepted principle “the polluter pays” was implemented only when the Verkhovna Rada passed the law “On Environment Protection.”

“However, the environmental taxes and fines are probably the lowest in Europe. Besides, experience shows that out of hundreds of cases when water legislation was violations only a few end up with an adequate punishment for the guilty. Because of this almost all river basins in Ukraine are in an extremely dangerous ecologic condition, especially the Basin of the Dnieper River, which is the main source of country’s water supply.

“Despite the decline of manufacturing, which resulted in lesser amounts of effluents, water bodies in Ukraine are polluted with nitrogen compounds, oil products, and heavy metals. At water withdrawal points the concentration of priority pollutants comes close to the maximum permitted level and in some cases exceeds it. The ecosystems of small rivers are the first ones that are affected by changes in the human activity–nature system. If we consider the fact that small rivers in the Dnieper River Basin make up 90 percent of the whole fluvial network and that about 60 percent of water resources of Ukraine are being formed in their basins, it becomes obvious where is the source of the main problems with water and what should be done to solve them.

“Unfortunately, due to economic activities we are losing deep ground water. Large bodies of polluted underground water are in Dnipropetrovsk oblast, in southern Ukraine, and in the Zhytomyr–Rivne area.

“In the past 10 to 15 years the situation was aggravated due to the following causes: land was n allotted for private use on river banks and the communal service discharges and manufacturing waste became worse pollutants due to lower level of water cleaning. The problems of Ukrainian rivers nowadays include overregulation (cascades of water reservoirs, ponds, and weirs), ploughed soil on river banks, absence of forest belts near the rivers, private land plots extending all the way to the water, and, in recent times, raising banks in the area of flood plains for construction purposes. Water reservoirs also upset the ecological balance because they slow down water circulation, which leads to the flooding and salification of soil. Furthermore, precipitation contributes 10 percent of water pollution.”

Are small rivers decreasing in number?

“Nowadays there are over 22,000 small rivers in Ukraine, although a couple decades ago specialists estimated their number at more than 60,000. When we were children, there were rivers that you could drink water from, for example, the Lybid and the Samara. The latter was once navigable but by now transformed into a cascade of lakes. Its water, which used to be clear and soft, is now being reported to be the most polluted water in the Dnieper Basin.

“According to a report of Ukraine’s Ministry of Environment Protection, the salinity of the Oril, the Samara, and the Vovcha exceed permissible limits. The reason is coal mining near these rivers in the western Donbas for the past 50 years. No one would dare to commit this kind of crime in any other country of Europe: millions of cubic meters of brine pumped out of coal mines go into the rivers. The same kind of situation is with the Inhulets River: it is being polluted by the ore mining and smelting complex. The rivers in the Donbas Basin are in a much worse condition — they are being abused by everyone. There is no single clean river in Lower Prydniprovia and the Donbas, while underground water bodies are limited or unfit for use.”

Is there any pollution coming from abroad?

“Waters of rivers in Transcarpathia have been polluted many times because of industrial accidents in Romania. The Desna, once clean, now brings from Russia all the problems caused by the absence of water purification systems in factories and cities located on its banks. However, we ourselves pollute our rivers the most.”

Does nature still have the potential to recover?

“It does, but the longer we exploit it, the faster it degrades. The self-restoration mechanisms are still in place in bodies of water. The foremost one is water circulation, which, however, requires clean air. An important component is also water filtration in the upper strata of soil. Unfortunately, this is where we have done a lot of damage — the condition of our soils is alarming.

“We also need to mention the role of rapids in water purification. A similar part, although to a smaller degree, is played by sandy river bottoms. Rapids are called the lungs of rivers, and that is precisely why activists are fighting for the rapids in the Boh River, which are now being flooded from the water reservoir of the Tashlytska Hydropower Plant.”

With each passing year the quality of drinking water is going down, especially in cities. What is your assessment of the situation?

“We have a special service at the Ministry of Environment Protection that supervises the issue. However, most of our labs are incapable of identifying all or even most pollutants that are present in water. Furthermore, supervision and control are not extended to bottled water and water drawn from local springs. Our norms for mineral content in water have been carried over from Soviet times and differ from American and European norms. Mineral content is important — scientists believe that using soft water is healthy and that it prolongs life.

“The existing problems with water are not being solved and are even being aggravated. According to the State Committee for Consumer Rights Protection, the quality of drinking water is critical in 12 oblasts of Ukraine, unsatisfactory in eight, and satisfactory only in five oblasts. Centralized drinking water supply is available in 450 cities, some 90 percent of urban-type settlements, and 25 percent of villages. However, 25 percent of water purification facilities in Ukraine, 20 percent of water pumping stations, and half of the pumping equipment are beyond their service limit. Over 37,000 kilometers of pipes in the water supply system and 14,000 kilometers of sewage pipes (over 30 percent) are in catastrophic condition. Moreover, our water consumption norms are set at over 300 liters per person per day, which is three times higher than in developed countries. That is why losses in water supply systems reach 30 – 40 percent and even 50 percent in some regions.”

Is the situation with water supply better in rural areas?

“It is one of the worst in Europe. Now a mere 25 percent of rural population in Ukraine have central water supply available to them. The rest use wells, self-made well bores, small ponds near watercourses, and water brought from other locations. The situation in southern oblasts and industrial regions is the worst because 80 percent of the water supply in Ukraine comes from surface waters, nearly all of which is polluted.”

Is purchasing bottled water a good solution? There are debates on this issue, too.

“In order to preserve the natural mineral waters in the same condition as they are found in the spring, they cannot be treated in any way. They can only be purified according to relevant norms. Now there is no clear-cut classification of bottled water on the Ukrainian market and no standards for bottled water. (The state standard has been developed but has not been approved yet.)

“Many people use water from wells that reach deep water-bearing layers that are not connected with surface water. Because these layers are well-protected from pollution, water from them has distinctly high purity and healthy chemical content. However, it should be remembered that this water, if not boiled, should be consumed within a day, especially in the warm season. The best water comes from deep-lying underground springs, especially if it is soft. The most salubrious water is found in such resort areas as Myrhorod, Truskavets, Morshyn, and Svaliava.”

What can your specialists offer in order to improve the situation?

“The All-Ukrainian Ecological League has prepared certain proposals specifically for the meeting of the National Security and Defense Council on improving water supply and water protection. Our proposals include the following measures: inventorying the existing bodies of water in Ukraine; reviving the so-called ecological passports for small rivers that will provide information on their condition and help find solutions; thoroughly analyzing legislation pertaining to the use of bodies of water, marshes, and the basins of small river; developing the Environment Code of Ukraine based on the best Ukrainian laws and best European practice that is relevant to Ukraine.

“We also believe that a number of new laws need to be adopted that will provide a comprehensive framework for assessment of damages and benefits in real economy that result from solving water management problems. It is our conviction that the legislative and legal framework needs to be in place in order to secure investments in the water protection sphere. This is just a small sample of our proposals.”