Encouraged by Moscow, Rusins Step Up Drive for Autonomy and Threaten Kyiv with Armed Revolt 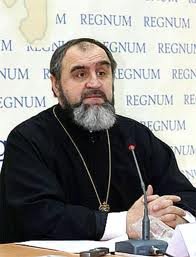 Only weeks after Russia’s consul general in Lviv called him the “Moses” of his people, Dmitry Sidor, an Uzhgorod priest loyal to Moscow who heads the Rusin movement in Transcarpathia, declared this week that “after many years” of using only political tactics, the Rusins are now prepared to “defend their freedom with arms in their hands.”

How seriously this threat should be taken is an open question. On the one hand, the Rusins have made similar threats before, most notably at the end of 2008. And on the other, an actual revolt as opposed to the threat of one would complicate Russian-Ukrainian relations and threaten Moscow’s oil and gas exports to Europe, much of which flows via Transcarpathia.

But however that may be, Sidor’s remark, especially coming in the wake of the comment of the Russian diplomat, seems intended both to remind the Ukrainian authorities that the Rusins have not gone away and to send a message to Kyiv that Moscow is paying attention to that community and is prepared to exploit that group if Ukraine does not bend to Russia’s will.

Yesterday, Sidorov said that the Rusins “are accusing Kyiv of ethnocide and discrimination with obvious elements of genocide” because of Ukraine’s “barbaric” failure to recognize the Rusins and “its ban on Rusin schools and the study of the Rusin language” (vvnews.info/analytics/region/65736-rusiny-zakarpatya-gotovy-k-voyne-s-ukrainoy.html).

If Ukraine and the new authorities will be able to recognize the rights of Rusins,” he continued, “then we Rusins are ready to remain a Ukrainian enclave, a Ukrainian Kaliningrad.” But if Ukraine won’t recognize “our lawfrul status of autonomy,” then “we will peacefully divorce. Like the Czech Republic from Slovakia.”

That can take place peacefully, the priest said. But “international law” allows for a solution brought about by force. “A people after many years of seeking its rights,” he said, “has the right with arms in its hands to defend its freedom,” just as the international community recognized in the case of the Croatians.

Sidor says that “we do not intend to fight and seek a diplomatic path because we believe in the reality of the achievement of our rights.” “At a minimum,” 70 percent of the residents of Transcarpathia are Rusins, making them “’a titular nation’” numbering today “approximately 800,000.”

Two years ago, when he and the Rusins made similar declarations and asked that Moscow recognize their independence, the Ukrainian authorities opened a case against Sidorov for threatening the territorial independence of the country. But since that time, two things have changed.

There is now a pro-Moscow government in Kyiv, and last fall Russia’s consul general in Lviv met with Sidorov and compared him to Moses because, he said, the Rusin priest is leading his people out of the wilderness (ru.tsn.ua/ukrayina/genkonsul-rf-nazval-lidera-podkarpatskih-rusinov-novym-moiseem.html).

Almost exactly two years ago, the Rusins asked Moscow to recognize them as an independent country because Kyiv was ignoring their demands for autonomy within Ukraine. That followed the Second European Congress of Rusins in Mukhachevo, which declared that the Rusins would seek independence on December 1st if they didn’t get autonomy.

December 1 came and went, but on December 19, an international scientific practical conference on “Genocide and Cultural Ethnocide of the Rusins of Carpathian Rus (the end of the 19th Century to the Beginning of the 21st Century)” assembled in Rostov-na-Donu and adopted a resolution on their cause.

Among the resolution’s key points was an insistence that alongside the Armenians, the Rusins – or Ruthenians, as they are also known -- were the victims of the first genocide of the 20th century, one carried out by the Austro-Hungarians. Today, the resolution continued, Kyiv is extending this through “a policy of cultural ethnocide.”

In addition, that document declared that the Ruthenians are recognized as a unique people in all countries of the region except Ukraine and that they enjoy the support of international organizations like the UN whose committee on the liquidation of racial discrimination in August 2006 criticized Kyiv for not supporting them.

And it pointed out that the status of the Transcarpathian Rusins has not yet been defined – Kyiv has not yet recognized the 1946 treaty which incorporated them into the Soviet Union – and that the Ukrainian government continues to ignore the December 1991 referendum in which the Rusins voted for autonomy as well as for Ukrainian independence.