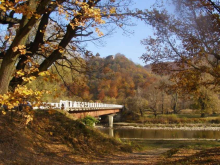 Epidemic of pneumonic plague in Ukraine?

Ministry of Health has not established the exact diagnosis of the epidemic disease in the western regions of Ukraine. Health Minister Vasyl Knyazevich has given information about spread of diseases in the Ternopil, Ivano-Frankivsk and Lviv Regions today at the meeting of Cabinet of Ministers.

According to the Minister, the World Health Organization is ready to render assistance to Ukrainian experts and the Ministry of Health in order to establish the cause of death and development of disease flu in the Ternopil, Ivano-Frankivsk and Lviv Regions.

"We are working at receiving the vaccine against influenza A (H1N1) also", - said Vasily Knyazevich and asked the Ministry of Foreign Affairs to render assistance.

Answering question of Prime Minister Yulia Tymoshenko about the definition of the specific nature of the disease, the head of the Ministry of Health said: "The nature of infections is viral one. But at the moment it is not defined, is it the Californian influenza H1N1, or it is our seasonal influenza. To date, there is no precise diagnosis."

In turn, First Deputy Prime Minister Olexander Turchynov urged "not to slow in the matter, and hold a conference tomorrow," and noted that preliminary information about the nature of infections will be received tonight.

According to the Minister of Health, to date, 12 adults have died in the Ternopil Region. "There are problems, people of working age 20-45 years are sick, there is a problem with pregnant women (we have the death in the Ivano-Frankivsk and Ternopil Regions), 17 patients remain in the grave condition, 4 of them have artificial pulmonary ventilation", - said Vasily Knyazevych.

According to the Minister, leading international experts, particularly from Russia and Europe, will be involving into establishing the diagnosis.

He noted that the Ivano-Frankivsk region reached the epidemic threshold. 6 deaths are registered there which are related to this situation. Also, the Minister of Health noted that the climatic and temperature conditions in the Ternopil Region did not lead to the development of disease in these regions.

In turn, Yulia Tymoshenko ordered before the end of today's meeting of the government to bring her all the data, the estimates associated with the epidemic disease as a draft form. She also ordered Oleksander Turchynov to consider the issue of informing the public through the video and broadcast that person should avoid work and study if he has signs of cold, and urgently appeal to the doctor.

In addition, Prime Minister instructed the Ministry of Health to send special circulars, which contain instructions for the doctors in this situation, to all hospitals of Ukraine, and to explore the amount of necessary additional funding to counteract an outbreak of viral diseases in the western areas.

In connection with the spread of flu quarantine has been declared in schools in the Ternopil and Ivano-Frankivsk Regions.

04:10 p.m. Despite the fact that doctors do not state that epidemic of swine flu has started in Ukraine, the facts speak for themselves: a man died in Transcarpathia. Precisely swine flu killed him.

According to reports, a week ago the man returned from Saint Petersburg, where he was on a business trip, with symptoms of cold, but sought medical treatment only when the health condition was already critical: there were complications in the form of inflammation of the lungs and pulmonary edema.

Doctors and specialists of the Transcarpathian regional sanitary-epidemiological station previously recognized swine flu as the cause of death, but in connection with the complexity of the final laboratory tests the cause of death of the man has not yet succeeded, reports Obozrevatel.

Another patient with symptoms of swine flu has been hospitalized to regional infectious diseases hospital in Uzhhorod. The resident of Koritnyany village, Uzhhorod district recently returned from Moscow, and felt a deterioration of health. Doctors are confident due to the timely treatment the patient will recover.

Today in Uzhhorod a press conference is planned to be held involving specialists of the Office of Health and State Administration. It will be held at 03:30 a.m. in the regional center of health.

As MIGnews.com.ua correspondent has learned, a group of specialists of Transcarpathian regional sanitary-epidemiological station has left for investigation of a fatal case in Volovets village, whence the deceased comes from. Doctors say that it would be too difficult to confirm the presence of swine influenza in the region - in Ukraine there are no special methods and technical capabilities, Vitaly Logos, MIGnews.com.ua correspondent reports.

An epidemic of A/H1N1 influenza may appear in November in Ukraine, told the director of the Ukrainian Center of influenza and acute respiratory infections Olexander Hrynevich. "Most likely, it will appear when the weather deteriorates. People will be cold”,- said Hrynevich.

05:22 p.m. 21 people have died in three western regions of Ukraine, according to preliminary data, of pneumonia, ForUm reports. Swine influenza has not been found, but the final results will be known in two days, when the additional tests will be spent in London.

Today, on October 29, it has become known about another case of death from pneumonia in Chernivtsi. Ministry of Health calls on all citizens if symptoms of influenza or other acute respiratory viral diseases appear, go to hospital immediately.

Due to the epidemiological situation the trip of President Victor Yushchenko to the Lviv Region may fail, Glavred cites the chief state sanitary doctor of the Lviv region Roman Pavliv as saying.

On Saturday, October 31, business trip of President of Ukraine to the Lviv Region is planned to be on the occasion of the establishment of the West Ukrainian National Republic.

Three members of Ukraine’s embassies are being checked by doctors on influenza A (H1N1), Foreign Minister Petro Poroshenko reported. "There was information that the three officials of embassies are suspected of being ill with virus A (H1N1). All necessary facilities were provided for treatment and diagnostics," - he said.

Petro Poroshenko said that the Foreign Ministry established a fund for immediate disbursement of funds for treatment in cases where the health of members of diplomatic missions of Ukraine is under threat. The Ministry is also developing mechanisms for temporary insurance for diplomats working in countries where the epidemiological threat or an emergency for their social protection are declared, Ukrainian News reported.

05:39 p.m. Doctors are calling on citizens not to vaccinate against influenza, because such vaccination in the midst of the epidemic may injure the health, coordinator of epidemic influenza in Lviv Miron Borysevich claimed at a press conference, proUA.com reports.

"When an outbreak of influenza begins, nobody is being vaccinated. From the point of view of epidemiology this can not be done because it is harmful. It may harm the patient," - he said.

At the same time, doctors advise not to communicate with people who are sick. If you have to contact with sick people, use flu masks.

A closed meeting has been held in Ivano-Frankivsk, at which participants agreed that epidemic of the so-called "pneumonic plague" is being spread throughout Ukraine. But the problem is its form is unknown, it is ATYPICAL nobody knows how to treat it.

PNEUMONIC PLAGUE has an acute course than other forms, over and is accompanied by a very high mortality rate. The incubation period of primary pneumonic plague rarely exceeds more than 1-4 days. It begins, as a rule, suddenly - with shivering, fever, headache, myalgia, weakness, nausea. The symptoms of pneumonia - cough with phlegm, chest pain, shortness of breath - usually appear on the second day of the disease. Blood spitting, growing respiratory disorders, heart failure, respiratory failure, shock are being observed. In primary pneumonic plague phlegm usually is watery or mucinous, foamy, with blood or visibly bloody.

A secondary pneumonic plague occurs as interstitial pneumonia. Phlegm is scanty and more dense and viscous than in primary pulmonary plague. It is believed that in this regard, patients are less contagious.