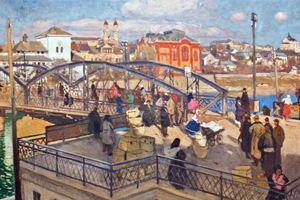 To mark the 120th anniversary of the Transcarpathian artists Yosyp Bokshai and Adalbert Erdeli the exhibit halls of the Khlibnia Gallery at the National Preserve “Sophia of Kyiv” opened the most complete exhibit of the artists’ works in recent time.

The exposition includes works from the funds of the Bokshai Zakarpattia Museum of Arts, the National Museum of Arts of Ukraine, and private collections. The exhibit “A Look from the Distance of Time” in the five halls pre­sents over 100 classics’ works, whose names have long become part of the history of Ukraine’s visual arts, moreover, the works of Erdeli and Bokshai are an integral part of the world’s artistic heritage.

The exhibit will be open in Khlibnia for two months, and it embraces all the periods of the creative work of the Trans­carpathian artists. Their lives are closely interlinked (they were coevals, came from the same region, studied together at the Budapest Academy of Visual Arts). This enabled the artists to establish the Transcarpathian school of painting and bring it to a worthy international level.

The main biographical milestones are as follows.

Yosyp Bokshai was born on October 2, 1891, in Rakhiv raion of Zakarpattia oblast. After studying in Budapest he worked in Uzhgorod as an artist and pedagogue, and later lectured at the Lviv State Institute of Applied and Decorative Arts.

Adalbert Erdeli was born on May 25, 1891, in Irshava raion of Zakarpattia oblast. After studies in Budapest he studied and worked in Hungary, Germany, and France. Erdeli was fluent in several European languages, and an expert in world art, history and philosophy.

From 1916 on he taught painting in the secondary schools of Mukacheve and Uzhgorod. He is one of the organizers and first head of the Zakarpattia Oblast Organization “The National Union of Artists of Ukraine,” since 1946.

Liudmyla BIKSEI, deputy head on scientific work of the Bokshai Zakarpattia Museum of Arts, winner of the Oblast Bokshai and Erdeli Prize:

“The tandem of Erdeli and Bokshai was exceptional; there are few examples of such fruitful creative cooperation in the history of Ukrainian art. At first they founded the so-called ‘Private Public School of Painting’ in Uzhgorod in 1927. That was the first establishment of its kind. They taught mainly young people with a talent for painting. They taught the fundamentals of painting: composition, drawing, and perspective. Bokshai and Erdeli had a wonderful schooling background, so apparently they could give much to those young people. In the background of the tragic and inhuman events of the early 20th century this regional school was distinguished by humanism, frequently idealism and romanticism marked with artistic images and folklore.

The form of artistic life in Transcarpathia they dreamt about was realized in the way of Transcarpathian Barbizon. Both founders of the school brought something of their own to the common cause. The great selfless work of Bokshai, whose classical lessons on the profession were methodical and very responsible had a tangible effect. And exhibits, expeditions, plein air painting, and active civic work helped prepare the specialists. Actually, Adalbert Erdeli brought the talented Transcarpathian boys closer to the artistic Paris, by not only showing the contemporary artistic streams, but also involving the pupils in active creative work.”

The exhibit is open until July 19, 2011, at the Khlibnia exhibit halls of the National Preserve “Sophia of Kyiv.” (Kyiv, 24 Volodymyrska St.)