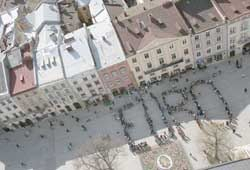 The UEFA has officially announced four Polish cities and the capital of Ukraine to be host cities of Euro-2012 soccer games. The UEFA will make its final decision on the remaining Ukrainian cities later, according to the official UEFA website. At the congress in Bucharest, which was held on May 12–13, the Union of European Football Association postponed until November 30 the decision on which Ukrainian cities will be hosts.

Poland does not have to wait like some of the Ukrainian cities: four Polish cities (Warsaw, Pozna , Wroc aw, and Gda sk) are now confirmed as tournament hosts. Only one Ukrainian city, Kyiv, has now joined the list of hosts. “There are many issues connected with the infrastructure that have to be solved before the candidate cities can become Euro-2012 participant cities,” the official UEFA website quotes Michel Platini as saying. According to him, at the moment Lviv, Donetsk, and Kharkiv are being considered as candidates for hosting Euro-2012, with the final decision due on by November 30. For Dnipropetrovsk and Odesa all chances are lost.

The UEFA president made a special mention at the press conference in Bucharest about the progress in preparing for the championship that Ukraine has made in the past couple of months. However, a significant part of work should still be done, he says.

Evidently, the progress we have made did not impress the UEFA as much as the Ukrainian side had desired. Kyiv was confirmed only to host the group stage games, quarterfinals, and semifinals. The decision made in Bucharest was that the championship final will be held at the renewed Olympic Stadium in Kyiv only if adequate conditions at the stadium, in the airport infrastructure, transport system, and hotels are created. The same is true for Donetsk, Lviv and Kharkiv if group matches are to be held there.

Unfortunately, the UEFA executive committee was not impressed with the letter from Ukraine’s political leaders. President Viktor Yushchenko, Speaker Volodymyr Lytvyn, and Prime Minister Yulia Tymoshenko wrote a joint letter to the UEFA president in which they assured that additional resources for Euro-2012 preparations will be allocated, reports UNIAN.

“We are certain that we will be able to fulfill all our guarantees, in particular with regard to the financial aspect of the Euro-2012 preparations.

This is secured via the implemented anti-crisis measures and a constructive dialogue with the International Monetary Fund. After four Ukrainians host cities are finally chosen, we will allocate additional resources in order to realize all the tournament preparation plans, particularly regarding the condition of airports, hotels infrastructure, and transportation networks.” Hryhorii Surkis, president of Ukraine’s Football Federation, passed this letter to Platini and members of the UEFA executive committee before the meeting.

Just before the meeting the UEFA had doubts that Lviv and Dnipropetrovsk will be able to host Euro-2012 on the appropriate level, reports Reuters. There was a chance these Ukrainian cities would be replaced by two reserve cities in Poland. As we can see, the UEFA has not left any chances for Odesa and Dnipropetrovsk, but at least there is a hope for parity with the Polish cities in the future.

Opinions were voiced recently that the decision-making process would be delayed with regard to both Ukrainian and Polish cities. For example, Andrii Kapustin, ab expert from the Euro-2012 Public Supervision Committee in Ukraine, said: “It makes sense, after all, because it would be not quite logical to stop 12 cities at stage of active preparations.” He believes that tournament preparation projects that had been launched in the rejected cities would take many years to complete, while the active upgrading of the infrastructure will come to a complete halt. That is why an additional year of preparations would do only good to Ukraine, said Kapustin.

On the other hand, the former head of the National Agency for Euro-2012 Preparations, Yevhen Chervonenko, said the other day that if the Euro-2012 host cities are named, the money for the preparations will be used more effectively. He believes that it could help to avoid ‘scattering’ money from the state budget by focusing on the smaller number of cities.

Now only four cities can receive special-purpose financing. However, they will have to catch up in conditions of unsettling uncertainty: the UEFA believes that the six Polish cities meet all the requirements for hosting Euro-2012 games, although a great amount of work has still to be done, according to the official UEFA website.

Photo by Kostiantyn HRYSHYN, The Day

“We first heard about this decision two years ago, when Platini drew out an envelope with ‘Ukraine-Poland’ in it. We have been working hard since then. The decision Platini made yesterday is proof that we’ve been moving in a right direction. In the next three years we have to do quite a lot but it is nice to know that there is certainty and there will be no strange competition that, to be honest, has been a hindrance to us recently. We will all work together for Ukraine’s good image.

“What concerns my personal feelings after the UEFA’s announcement, I am somewhat tired because it was a fairly big emotional stress. Now when things are clearer, I am thinking about how to organize everything on a good level. This is all about the active development of Lviv, something that has been my topmost concern.”

“We are not going to cut down Euro-2012 preparation activities. The situation with the reconstruction of our airport influenced the UEFA’s decision the most. They assigned the airport the lowest, 4th, category. Despite the fact that the issue with the airport’s privatization has been recently solved at the state level, which was the main condition for the potential investors, the decision itself was delayed in Kyiv for nearly 18 months, probably, on purpose.

“In general, the UEFA’s executive committee made its decision also under the impression of the fact that in Lviv and Kharkiv, where there are no good stadiums, construction works are being financed from the budget, whereas we planned on building the necessary objects at the investors’ cost.

“However, it can play a sad joke on the designated cities as the fulfillment of the state budget of Ukraine becomes more problematic with each passing month. The airport and the stadium under construction in Kharkiv are municipal property. It means that there will certainly be financial issues. The situation in Lviv is even worse: the construction of the stadium has just started; there is no investor; the issue of bonds in the situation of economic and financial crisis will unlikely provide the needed money.

“Dnipropetrovsk will keep preparing for Euro-2012 despite the fact that our fellow countrymen Yulia Tymoshenko and Oleksandr Turchynov, who occupy key positions in the Cabinet, have not helped their hometown in any way. The local businesses will finance the reconstruction of the airport; we will continue building and fixing roads; also, new hotels will be constructed.

“Another meeting of the UEFA’s executive committee will take place on November 30. Hopefully, another decision will perhaps be made on the shortlisted Euro-2012 host cities. Anyway, nothing tragic has happened—we’ll keep on living and working.”