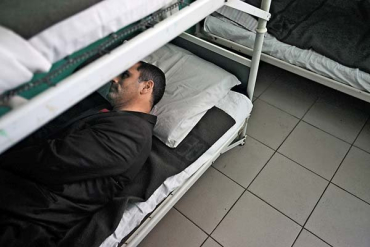 UZHGOROD, Ukraine – For a year and a half, a 15-square meter room in western Ukraine has been home for Said Mustafa Marufi, his mother and six siblings. It may be their home for years to come.

The Latoritsa temporary shelter in Mukachevo is the family’s latest stop in a homeless refugee journey that forced them to flee Afghanistan, with stops in Pakistan and Russia, before ending up in Ukraine.

“We fled Afghanistan during Taliban times and went to Pakistan,” Marufi sayd. Only 14 years old, he is now the head of the family after his father died in circumstances that they prefer not to discuss.

Marufi had hoped to cross into Slovakia, making it into the European Union. But they were caught and have been held ever since, international refugees in limbo. The family has applied for asylum status in Ukraine.

Last year, more than 1,500 migrants were detained on the border between Ukraine and neighboring EU countries. Another 700 were returned to Ukraine, under an agreement that allows EU countries to send migrants back upon proof that they entered from Ukraine.

A border guard stands in a hallway that is safeguarded by a grated metal door at an entrance to the Mukachevo residential shelter.

Tossed into poorly funded detention and temporary shelters, run by the police and border guards, migrants face ill treatment – from poor nutrition to beatings and torture, according to a recent report by Human Rights Watch. They have little hope of gaining refugee status and often remain at the centers for years.

Latoritsa is home to 59 people like the Marufi family, including 32 children. Another temporary accommodation centre in Zakarpatska Oblast – Barvinok in Perechyn village accommodates 22 asylum seekers. Most of people in these centers arrived from Afghanistan, some from Tibet and Syria, transiting Ukraine on their way to the EU.

Despite new furniture and heating, paid for by the EU, the centers haven’t received a penny from the state budget since the end of 2010.

“We are learning to live without money,” said Luka Fedurtsya, who heads the two centers.

The situation is worse at the Odesa temporary shelter, home to up to 200 asylum seekers, which has already asked United Nations to pay their electricity bills and meals.

We are learning to live without money.”

- Luka Fedurtsya, head of two centers.
“In 2010, one liter of milk was given to a child every week. Now there is no milk at all. There is also no soap and shampoo,” says Marifat Ahmat Arshat of Afghanistan. He lives in Latoritsa with his wife and two small children.
The Interior Ministry, which is now in charge of these centers, blames the financial troubles on administrative reform.

The State Migration Service is in the process of being created to replace the State Committee of Nationalities and Religions. But in the meantime, there is no entity that can obtain money from the state budget.

A four-month-old Afghan baby girl lies on a bed that is shared by her parents and brother at the Latoritsa temporary center in Mukachevo.

Guards have to be trained more, conditions need to be improved and the law has to be amended, but it takes time.”

- Oleksandr Skigin, head of central administration department of State Border Service.
“People from the committee and those working in accomodation centers have acquired unique experience and received specialized training. If they all to be dismissed and replaced with untrained OVIR (foreign registration office) officers, it will be a disaster,” says Oldrich Andrysek, regional representative of the U.N. High Commissioner for Refugees (UNHCR) in Belarus, Moldova and Ukraine.

Fedurtsya adds that it would be the same as if “a person who was a prosecutor for decades switched to being an advocate.”

The State Border Service admits there is room for improvement in migrants’ treatment. Oleksandr Skigin, head of central administration department of State Border Service, says he was aware of most of the cases from the Human Rights Watch report. Eight officers suspected of mistreating migrants were fired in 2010.

“Guards have to be trained more, conditions need to be improved and the law has to be amended, but it takes time,” Skigin adds.

A Turkish man lies in bed. (Photographs by Joseph Sywenkyj)

“In most cases border guards or police do not tell people about their options. Often language barrier is the reason with few interpreters available,” says Mykola Towt, head of department for migration of Zakarpatska Oblast.

Those who do not apply wait for a court decision and are either sent back home or, if they are undocumented and impossible to identify, let out of the detention centers after up to six months and often try to cross the border again.

In most cases border guards or police do not tell people about their options. Often language barrier is the reason with few interpreters available.”

- Mykola Towt, head of department for migration of Zakarpatska Oblast.
Those who don’t receive refugee status are left with no legal status, as Ukrainian legislation does not imply humanitarian status. In such an environment, corruption flourishes.

Officials deny it, but refugees report that bribes get paid to the Committee for Nationalities and Religions in Kyiv, which decides on status. “According to refugees, the bribe for the status starts at $1,000,” says Dmytro Hroysman, head of the Vinnytsia Human Rights Protection Group.

In nearby Chop, a new detention center for families is being built. However, the residents don’t want it in town. “The problem is the guards are very corrupt and they often let detainees out and even bring them prostitutes,” says Larysa Stupak, the deputy mayor of Chop.

Even those given refugee status have a tough time. There is little state support for integration, such as language classes. Without a passport, they cannot receive an identification code to allow them to seek employment and pay tax, or receive unemployment benefits and free training.

Marufi, the 14-year-old head of a family of seven, is still waiting for a decision on their status as he dreams of studying computer science. This dream is not likely to come true in Ukraine. According to the law on education, refugees cannot get higher education for free.

“I understand I only have God to ask for help. I will probably have to work to feed my family,” Marufi says. He proudly tells of his first job in Ukraine – chopping firewood with an axe in a village nearby, earning $7 per day.