The ex.ua file-sharing website partially reopened in the early hours of February 3 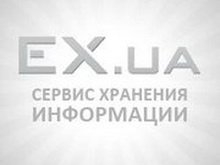 Police intends to examine the computer servers that were seized from the ex.ua file-sharing website for existence of counterfeit products during the period of February-March. The head of the press service of the Interior Affairs Ministry, Volodymyr Polyschuk.

He attributed it to the need to conduct a large number of examinations.

Polyschuk stressed that servers containing counterfeit products will be used as material evidence in a criminal case.

As Ukrainian News earlier reported, police earlier announced that they intended to identify the people involved in the uploading of counterfeit software, videograms, and audiograms onto the ex.ua file-sharing website.

Police shut down the ex.ua file-sharing website on January 31 as part of a criminal investigation into copyright violations.

Later in the evening on January 31, there were problems accessing the website of the Interior Affairs Ministry, which the ministry blamed on a hacker attack.

The official website of the president of Ukraine was subjected to attacks by hackers in the early hours of February 1.