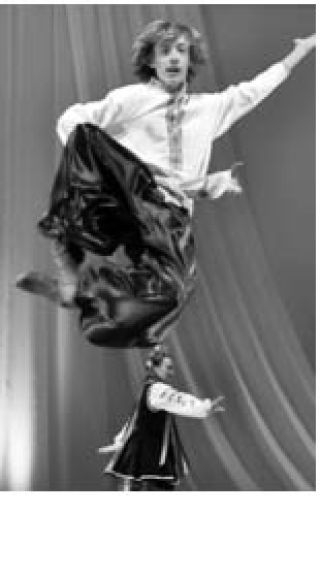 The Sadok Ukrainian Dance Ensemble is about to shake The Golden Tambourine with its 11th anniversary theatrical dance production at the Vernon Performing Arts Centre.

On stage Sunday, May 30, The Golden Tambourine is a fairytale set in Ukraine featuring the mystical forest nymphs called Mavky.

“According to folklore, the biggest danger in Ukrainian forests was from woodland nymphs called Mavky, which lured their victims with beautiful songs, then tickled them to death,” said Sadok’s artistic director Andrea Malysh, who has choreographed the presentation.

Sadok’s story begins in the region of Transcarpathia in the southwest flanks of the Carpathian Mountains of Ukraine, where a young shepherd has lost his sheep and is chasing around the rolling hills looking for them.

He comes across the magical Golden Tambourine in which the Mavky forest nymphs are playing a trick on him and his sheep.

“This is just the start of the Mavky, their trickery and travels throughout Ukraine,” said Malysh, who has studied and practised Ukrainian folk dance and ethnography for the past 25 years.

Malysh has had the privilege to work with other professional instructors and regional experts in Canada, Australia and Ukraine. In 2006, she was awarded a diploma from the school of choreography at the Virsky National University of Arts and Culture in Kyiv, Ukraine.

Her Sadok Ukrainian Dance Ensemble has continually pushed the boundaries of the art form by entertaining and educating their audience about their Ukrainian heritage.

They have performed throughout the Okanagan, Vancouver, Alberta and Los Angeles.