Klimkin: Events in Donbas a crash test for OSCE and EU 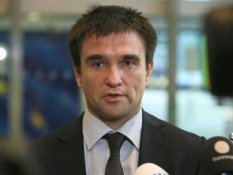 The settlement of the situation in the east of Ukraine is a test of the suitability and effectiveness of such organizations as the OSCE and the EU.

Ukrainian Foreign Minister Pavlo Klimkin said in his speech at the European Security Forum 2014, which takes place in Brussels on Monday, a Ukrinform correspondent reported.

"In my opinion, what is happening now in Donbas has become a crash test for the OSCE, as well as for the European Union," the minister said.

He noted that Ukraine, which has the experience of confrontation in a "hybrid war," was ready to initiate respective reforms to increase the effectiveness of the OSCE and would unveil them at the next ministerial meeting of the organization, which will take place in Basel, Switzerland.

In particular, according to Klimkin, the issue concerns the experience of combating propaganda and ensuring freedom of the media, as well as the establishment of an effective regional system for the control of weapons.