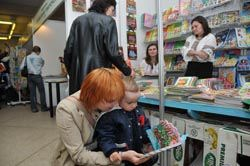 Lviv has hosted the third annual book fair Publishers Forum to Children. This event, the only one of its kind in Ukraine and one of the few in Europe, is completely devoted to children’s literature and reading.

Oleksandra Koval, president of the Forum of Publishers civic association, told The Day that the participants of the May 2009 Book Fair included 55 publishing houses that produce literature and periodicals for children and 46 that deal with educational literature. As always, the newspaper Den/Day also participated with its Library Series that focuses on historical research and is systematically delivered to school and university libraries.

For three days in a row, May 7–9, Lviv’s Palace of Arts, the now traditional venue of the publishers’ forum, saw the launching of dozens of new printed, computerized, mobile and audio books and magazines for children, educational literature from Ukraine’s largest publishing houses, as well as meetings with Ukrainian writers, autograph sessions, master classes in handicrafts for children, a scholarly workshop on children’s reading skills, etc.

This year’s book fair was visited by the singers Vitalii Kozlovsky and Mika Newton who held the Book from a Star action, greatly admired by children. Among other guests of the forum was Kestutis Kasparavicius, a children’s book illustrator, who drew “a Vilnius giraffe who greets Lviv.”

Meanwhile, Slavko Vakarchuk was gathering, jointly with the Publishers Forum to Children, books for orphanages and village libraries. There was also a pageant of literary heroes involving Lviv school students and contestants of the All-Ukrainian Festival of Theatrical Art. As the children’s book forum went on, the Shevchenko Grove reverberated with the “Feast in the Country of Little Angels.” Besides, Lviv residents and guests were invited to attend the Reading Family photo exhibit and show their skills in the competition of the erudite.

The exact turnout figure for the book fair, but its organizers anticipated around 40,000 people to attend. Indeed, on the first day of the fair the Lviv Palace of Arts was packed to capacity from the very morning. Visitors came in droves — families and school classes alike. But The Day’s correspondent did not, unfortunately, notice too much stir on the second and third day.

“Our civic organization, Publishers Forum, has been tackling the problem of reading for eight years now,” Koval told The Day. “We have acquired experience and established international contact over this time. We also maintain ties with most of the Ukrainian experts who study various aspects of the problem and hold conferences, workshops, and other events, which, I believe, will soon lay the groundwork for a national reading support program. For example, the Best Reader of Ukraine competition, which began as a purely Lviv-based event in 2002, has assumed a nationwide scale by 2005 — without any administrative leverage at that. Three years later, in 2008, it was attended by over 140,000 children!

“Still, it is insufficient to hold similar large-scale events throughout Ukraine. However, we should not confine ourselves to these events alone. What can save the situation is the launching of a state-sponsored reading support scheme because this requires radical changes in preschool and school education and in the way the network of public and school libraries is functioning. I took me eight years to try to persuade the Cabinet, the Verkhovna Rada, and the relevant ministries that we need a national reading support program. No results so far. So, in my opinion, this kind of program should be launched on the regional level so that other oblasts can also pick it up. I hope we will manage to produce a nationwide effect in this way.”