Maksym ROZUMNY: “So far, we have not seen any new quality of political forces maturing in this country” 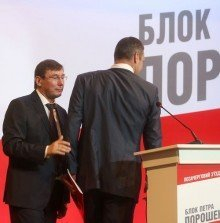 Political forces and their leaders were in a hurry. Day and night, they were holding backstage negotiations on party lists and fought over schemes of electoral campaigns. September 14 was the last day for nomination of candidates. They have determined their stances. That last day was the most important one, as most parties held their conventions on it. We will not dwell on names, as all of them are already in the media. What trends can be identified?

First. The country, of course, badly needs new faces in power, and it was the principal demand of the Euromaidan. Still, against the background of the Russian aggression, even during the so-called truce (which involves continued attacks by the militants who kill our soldiers), the struggle for a place under the sun (on the list of candidates of parties) looks just too cynical. Perhaps this format and behavior is the essence of power... However, the price paid for our freedom is way too high to keep playing by the old rules. The public demands changes to the system, which should have involved at this stage a change in approach to the selection of those who would go on to represent the people in the Verkhovna Rada. Based on what the public has seen, approaches have not been changed, barring some nuances.

Second. At the beginning of the Revolution of Dignity, we of The Day stressed the need to channel people’s energy and efforts of civic activists into a single structure that would later bring a new quality in Ukrainian politics. It has not happened this way. Most civic activists stressed that it was unrealistic, because, they said, they were just too different, although the main difference between them was that many of them saw themselves as the leader. As a result, various parties and associations mushroomed following the Euromaidan. There may be some good to it, but... They promised once again to unite before the election and claimed there would be no other way. Again, it has not happened.

And now, young leaders are present on the lists of all existing major players. Some would remark they are still better than the old ones. Yes, but will they be able to get common work done under the dispersion conditions? Changing the system after becoming a part of it is much harder than introducing new rules with a party of one’s own design. Of course there are exceptions, like Self-Help and People’s Power... although there are issues with them too, but will they clear the threshold? On the latter, civic leaders who are currently seeking to become MPs lost the fight before the race even started. They could not force the current MPs to change the electoral law, so are now forced to play by the rules which were written by Viktor Yanukovych’s administration, and which the new government have not tried too hard to change, though they promised it before the presidential election.

Third. The characteristic feature of the new party lists is, of course, the presence of volunteer battalions’ commanders on them. Under conditions of the Russian aggression, it looks logically. We still would refrain from the rush to evaluate, let us see how they will work as MPs. A similar situation obtains with journalists. There are more of them on the lists than ever before. This often does not fit with what and whom they covered and criticized... As already emphasized, by failing to go with one’s own party, one becomes part of another.

The rest of the trends are familiar to us: migration of politicians from one party to another, the return of named blocks, parties which are created on the fly for the present campaign, stars and athletes on the lists, experts in unsafe positions on the lists or in parties that have no chance to enter the assembly... The new Rada could set the tone for society, but with these approaches and lists, it will just prolong the agony of the oligarchic system. It would seem to have a lot of new faces, but intellectual novelty will not be there.