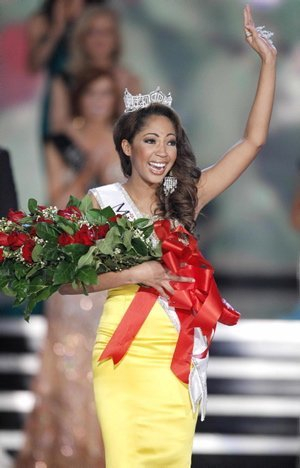 Miss Virginia Caressa Cameron won the 2010 Miss America title Saturday night after strutting in a skintight yellow dress, belting Beyonce's "Listen" from "Dreamgirls" and telling kids they should get outside more often.

Cameron, a 22-year-old from Fredericksburg, Va., won a $50,000 scholarship and the crown in Las Vegas after a pageant that started with 53 contestants. She outlasted her opponents in swimsuit, evening gown, talent and interview competitions.

Cameron is broadcast journalism student at Virginia Commonwealth University, and wants to become an anchor.

When asked during the interview portion of the competition her thoughts on fighting childhood obesity, Cameron said parents should curb television and video games.

"We need to get our kids back outside, playing with sticks in the street like I did when I was little," she said. "Expand your mind, go outside and get to see what this world is like."

The young women who came out on stage at the beginning of the pageant and danced to "I Gotta Feeling" by the Black Eyed Peas are from all 50 states plus the District of Columbia, Virgin Islands and Puerto Rico.

After a week of preliminary competition, they each introduced themselves to the crowd Saturday at the Planet Hollywood Resort&Casino.

"From the home of the Governator, I am here to pump you up," Cavinder said as she was introduced.

The judges, the public and contestants themselves then trimmed the field over the next two hours.

Actor and "Extra" host Mario Lopez hosted the 89-year-old pageant with help from Clinton Kelly of TLC's "What Not to Wear." The pageant was broadcast live on TLC.

Cameron, crowned by 2009 Miss America Katie Stam, will embark on a yearlong run with the title to represent the organization and raise awareness for her chosen platform.

Miss Oklahoma Taylor Treat won the $6,000 Quality of Life award, given to the contestant judged to excel most in volunteerism and community service.

Scores based on a week of preliminary competitions were added to Saturday's competitions to determine the winner. Each judge ranked their five favourites in order, and their ballots were used to pick the winner.

In all, the Miss America Organization awarded $340,000 in scholarships at the national level. The organization says its national, state and local chapters gave more than $45 million last year in cash and scholarships.

The pageant was preceded by a one-hour television special on TLC, "Miss America: Behind the Curtain."

The contestants picked 12 women from their own ranks who faced a public vote for one of three spots among the 15 finalists. Stam, a Seymour, Ind., native, was one of four finalists chosen by viewers last year.

The crowning of a Miss America began in 1921 as a publicity stunt to persuade tourists on Atlantic City's Boardwalk to stick around after Labour Day.

The bathing revue blossomed in the age of television into an American pop icon before fading in later years and losing it place on network TV in 2004. It moved to the Las Vegas Strip in 2006 in an attempt to reinvent itself and has found a home on cable television.