Over 6,000 killed in Ukrainian conflict 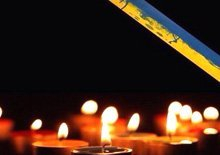 Since the beginning of the anti-terrorist operation in Eastern Ukraine 1541 military men were killed, 6 226 soldiers were wounded.501 servicemen receive medical treatment in hospitals, 13 of them are seriously injured. This is what acting spokesman of the General Staff Vladislav Selezniov told "Radio Liberty".

According to the General Staff, only from the start of implementation of the Minsk deals of February 12, that were to stop the fighting in eastern Ukraine, 58 soldiers were killed, 320 were wounded. According to the head of the UN mission to monitor the human rights situation in Ukraine Armen Arutyunyan, these numbers are growing - data on the victims killed during their leaving Debaltsevo are being constantly updated.

The conflict in eastern Ukraine has claimed over 6,000 lives.This is what head of the UN mission on Human Rights in Ukraine Armen Arutyunyan told.A further 14,800 people have suffered injuries, he said.

However, he said, given that the full report of casualties, especially near Donetsk airport and in the area of Debaltsevo has not yet represented, the mission of the UN Human Rights estimates that the total number of people killed today in eastern Ukraine in almost 6 thousand people.