Poroshenko gets 53.7% of votes with over 60% of electronic voting reports processed 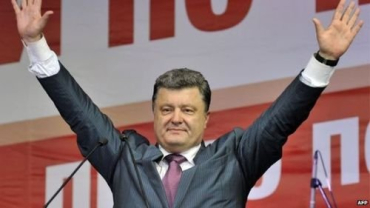 Front runner in the early presidential election in Ukraine Petro Poroshenko is leading with 53.72% of votes after 60.15% of electronic voting reports have been processed, the Central Election Commission (CEC) said on May 25 morning.

The voter turnout in the early presidential election in Ukraine was over 60%, said Head of the Central Election Commission (CEC) Mykhailo Okhendovsky said.Voting data has already been obtained from 188 constituencies out of the total 189 where the voting took place, he said at a briefing on May 25."Already one can say that the turnout was over 60%," Okhendovsky said.

One district election commission does not have the opportunity to give information to the Elections system, the official said.To be precise, the voter turnout now is 60.29%.The highest turnout was registered in Lviv region (78.2%), Ternopil region (76.63%), and Ivano-Frankivsk region (74.95%).The lowest turnout was seen in Donetsk region (15.37%), Luhansk region (38.94%), and Odesa region (46.01%).