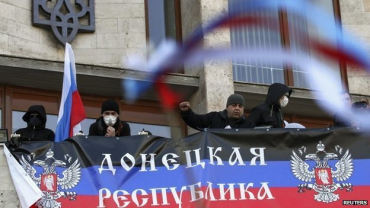 Pro-Russian protesters have stormed government buildings in three eastern Ukrainian cities. In Donetsk, Luhansk and Kharkiv they clashed with police, hung Russian flags from the buildings and called for a referendum on independence.

The unrest comes amid tensions between Russia and Ukraine over the removal of pro-Moscow President Viktor Yanukovych and Russia's annexation of Crimea.

These are not the first protests of this kind in eastern Ukraine. Nor are they that big. But they have resurfaced with renewed determination and co-ordination.
Moscow will argue they show the strength of feeling among Russian speakers and reinforce Russia's call for speedy constitutional reform to give them more say over their own future.
But after the Russian takeover in Crimea, Kiev suspects that this is not grassroots activism, but an orchestrated campaign designed to trap Kiev into either succumbing to demands to let eastern regions govern themselves or even break away to join Russia or running the risk of mounting unrest and a possible Russian invasion.
So it is no wonder Ukraine's acting president has cancelled his trip abroad.
If he can't stop these rallies from getting bigger and more violent, he fears that President Vladimir Putin could claim Kiev has lost control of eastern Ukraine, and Russia has no option but to intervene for "humanitarian" reasons.
Why have protests erupted?
Russian President Vladimir Putin has said Moscow has the right to protect the Russian-speaking population there.

Ukraine's leaders deny the country's Russian speakers are under threat and have said they will resist any intervention in their country.

Ukrainian Acting President Olexander Turchynov cancelled a planned visit to Lithuania and called a meeting of the country's security chiefs to deal with the unrest.

In Donetsk, in what was reportedly the day's most violent protest, a large group of activists broke away from a crowd rallying in the main city square to attack and occupy the regional government seat.

After clashing with riot police and breaking through their lines to enter the building, they raised the Russian flag and hung a banner from the building. Protesters outside cheered and chanted: "Russia, Russia."

Ihor Dyomin, a spokesman for Donetsk local police, said about 1,000 people had taken part in the storming of the building.

"Around 100 people are now inside the building and are barricading the building," he added.

The protesters in Donetsk engaged in a stand-off with riot police
Scuffles between the two sides broke out
A breakaway group broke into the regional administration building and hung a banner
In Luhansk, similar scenes saw pro-Russian demonstrators remove the sign from the front of the Ukrainian state security agency
In Luhansk, police fired tear gas at dozens of protesters who broke into the local security service building in an attempt to force the release of 15 pro-Russian activists who were arrested earlier in the week and accused of plotting violent unrest.

Local news reports said at least two people had been injured in clashes, and TV pictures from the scene showed a riot policeman being taken away on a stretcher.

They waved Russian flags out of windows as a crowd outside cheered and chanted. Police officers reportedly refused to use force against the crowd and moved away from the government building after the pro-Russian supporters broke in.

Ukraine's Interior Minister Arsen Avakov accused President Putin and Mr Yanukovych - who was forced from office in February following months of street protests and is now living in exile in Russia - of "ordering and paying for another wave of separatist turmoil in the country's east".

In a message posted on his Facebook account, he said: "The people who have gathered are not many but they are very aggressive. The situation will be brought under control without bloodshed. But at the same time, a firm approach will be used against all who attack government buildings, law enforcement officers and other citizens."

Tensions are running high between Ukraine and Russia, with thousands of Russian soldiers still said to be deployed along the border.

The new administration in Ukraine has faced continuing opposition from Ukraine's Russian-speaking regions.

Meanwhile, Ukraine's far-right Svoboda party has reported that the body of one its activists was found on Saturday after it was dumped in the woods with signs of torture, a day after his abduction in the central village of Vygrayev.

Svoboda was one of the participants in the protests that toppled Mr Yanukovych's administration.