Russian Armed Forces servicemen are being rotated in Ukraine 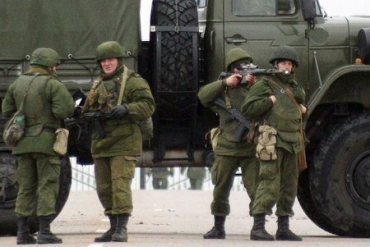 More military equipment is coming to Donbas from Russia, whereas Russian Armed Forces servicemen are being rotated in Ukraine.

National Security and Defense Council (NSDC) information and analytical center spokesman Andriy Lysenko said this at a briefing on Friday.
"The situation in the anti-terrorist operation zone remains tense. Heavy weapons are still being moved to Ukraine, and Russian Armed Forces servicemen are being rotated," Lysenko said.
He added that in order to protect the life and health of the civilian population from terrorist provocations, Ukrainian artillery forces had performed 29 fire strikes over the past 24 hours.

Another 11 Russian tanks 'get lost' in Ukraine

Another convoy of tanks, KamAZ trucks and Tigr vehicles has entered Ukraine from Russia.
Ukrainian National Security and Defense Council (NSDC) information and analytical center spokesman Andriy Lysenko said this at a briefing on Friday.
"A military convoy of 11 tanks, two Tigr vehicles and four KamAZ trucks, as well as eight artillery tractors for transportation, was moving yesterday at 06.00 from Russia towards Komsomolsk in Donetsk region," Lysenko said.
He said that the movement of a significant amount of military equipment across Izvaryne had been recorded over the past three days. "Columns included three tanks, two armored personnel carriers, two BM-21 Grad multiple rocket launchers, 121 KamAZ trucks, 14 trucks of another type, three vans, 22 Ural trucks and other equipment. Some vehicles were carrying military. Forty-seven Urals, 51 KamAZs, one BTR, one BRDM and two Grads moved in the opposite direction, to Russia," he said.